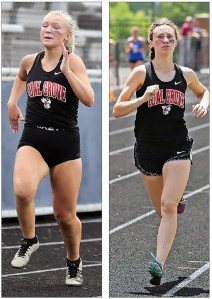 CHLLICOTHE — The Coal Grove Lady Hornets turned to their Slick Six at the Division 3 district track meet and they weren’t disappointed.

Senior Kylee Thomas along with junior Kelsey Fraley and sophomores Maddie McDaniel, Kylie Montgomery, Olivia Kingrey and Laura Hamm combined to place in eight event and seven of which qualified for the state meet Friday and Saturday, June 3-4, at Jesse Owens Stadium on the campus of Ohio State University.

Th top four finishers in each event at the regional meet Friday at Southeastern High School advanced to the state meet.

The final girls’ team standings was a logjam between three teams. Worthington Christian was first with 67 points, Fairbanks had 66 and Coal Grove 64.

The Coal Grove boys’ team will be represented at the state meet by senior Perry Kingrey and junior Chase Hall in two events.

Coal Grove also took first place in the 4×400 relay with a 4:05.23 time behind the combined efforts of Montgomery, Kingrey, Hamm and Thomas.

Fraley, Montgomery, Kingrey and McDaniel were third in the 4×100 relay with a 51.98 clocking.

The Lady Pointers’ junior Makinzie Luhrsen was seventh with a toss of 101-6. Sydney Foglesong of Arena won at 130-3.

South Point freshman Bindi Staley finished eighth in the pole vault as she cleared 8-feet, 4-inches marking the fourth time this season she has broken her own school record.