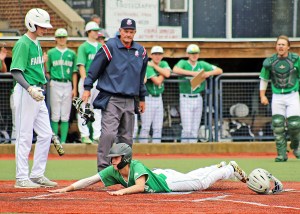 Fairland baserunner Keegan Smith scores a run in the sixth inning in a 3-0 win over Meigs as the Dragons won the Division 3 district championship. (Photo Courtesy of Bryan Walters/Gallipolis Daily Tribune) 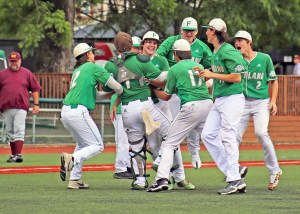 The Fairland Dragons celebrate after the final out as they beat Meigs 3-0 to win the Division 3 district championship on Friday at Veterans Stadium in Chillicothe. (Photos Courtesy of Bryan Walters/Gallipolis Daily Tribune)

CHILLICOTHE — As the Fairland Dragons keep winning, they keep on playing.

Fairland — winning its 15th game in a row — used the three-hit pitching of Blake Trevathan to blank the Meigs Marauders 3-0 on Friday to win the Division 3 district championship Friday at Veterans Stadium.

The Dragons (20-5) will play at noon on Thursday in the regional semifinals at Chillicothe Veterans Stadium against  Minford which used two balks in the seventh inning to score twice as the Falcons rallied to win 5-3 over Zane Trace.

Trevathan turned in a complete game as he struck out eight, walked two, hit two batters and had a wild pitch.

Fairland jumped out to a 2-0 lead in the bottom of the first inning.

With two outs, Niko Kiritsy singled to center, Cooper Cummings was hit by a pitch and Trevathan singled to left driving home Kiritsy.

Alex Rogers singled and an overthrow on the ball coming back to the infield allowed Cummings to score.

The score remained the same until the bottom of the sixth when the Dragons got an insurance run with two outs on a walk to Trevathan and Rogers double to left-centerfield that scored courtesy runner Keegan Smith.

Rogers went 2-3 with a double and and RBI, Trevathan 1-2 with an RBI and both Byrcen Hunt and Kiritsy were 1-3.

Caleb Burnem was 1-2 with a double for Meigs with Jake Martin and Ethan Stewart each 1-3.