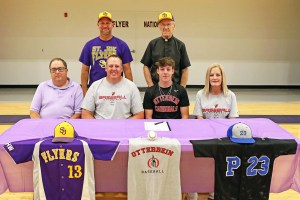 When it comes to baseball, work is not a four-letter word to Blake Stuntebeck.

The St. Joseph Flyers versatile senior standout worked to get in position to play college baseball and now he plans to work even harder after signing a letter-of-intent Tuesday to play for the Otterbein University Cardinals.

“I can’t wait. I’ve really worked hard for it. I’ve had great pitching coaches — Tim Martin — and hitting coaches — Tony Peeples — and coach (Greg) Bryant (pitching and hitting). I just can’t wait to be up there. I’m excited,” said the hard-throwing righthander. 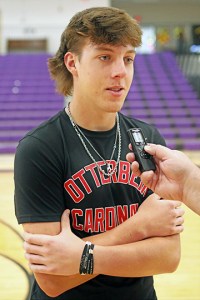 In the winter time around December, Stuntebeck said he will throw with Martin and “I also catch for him. Basically, my winter revolves around him. It’s working on baseball pretty much every day.”

One person who made sure Stuntebeck put in the work was his father Matt Stuntebeck.

“He makes me go out and practice all the time, eve if it’s days I don’t want to go. He’s always like, ‘Get up here. Let’s go, let’s go. Let’s get some balls and get throwing.’ So, my dad has been a really big influence on me,” said Blake.

The work he has put in and the help he’s had along the way will continue according to Stuntebeck.

“Yes, it’s about velocity sometimes, but it’s about hitting your spots. If not, they’re just going to hit you no matter what. I’m not expecting to get there and blow it by everyone this year. Any freshman shouldn’t expect to. But for the most part, it’s just hit your spots and it should be good.”

Flyers’ veteran head coach Greg Bryant said Stuntebeck not only improved throughout his career but was the go-to man in big all their big games.

“Blake improved every year and he’s grown up a lot,” said Bryant. “He took the ball in all our big games and kept us in it if not winning every big game until the time we ran into a team that was playing really well (Leesburg Fairfield).”

There were several schools on the recruiting list but Stuntebeck said Muskingum College and the University of Rio Grande were on Stuntebeck’s possible landing spots along with Otterbein.

“I liked Otterbein because it felt more like at home around them and the coaches made me feel welcome. Coach (George) Powell is a really good coach.” said Stuntebeck.

“They also had a really good winning record this year. They came in second in the conference,” he said.

Powell was named the Ohio Athletic Conference Coach of the Year this season for the sixth time in his career. Ottebein finished the season 27-15 including 14-4 in the OAC for a second place finish.

Speaking of numbers, on the season Stuntebeck had a .481 batting average with 3 home runs and 35 runs batted in. He also had 9 doubles, 4 triples, scored 34 runs and struck out just 11 times in 81 at-bats.

“He could have pitched a lot more. We threw him about once a week. When he was on his game, he was tough to beat. We were able to get some of the younger guys needed work and he just did his job. He never complained,” said Bryant.

“He played about every position. Of course he pitched, but he caught, played all four infield positions and even some centerfield. He hit for an average and with some power. He was one of the best all-around players in the area.”

Even though Stuntebeck can play several positions, he said Otterbein recruited him as a pitcher.

“They looked at me more as a pitcher. I can play anywhere. I’m a utility guy. Anywhere they need me to play, I’ll play,” said Stuntebeck who can also catch, play first base, third base and outfield.

“I just know they recruited me for pitching and varsity only I’m pretty sure.”

Stuntebeck has played golf and soccer — which he said was a good thing this year — and he even played basketball for one season and some football at Ironton.

“For the most part, it’s baseball, golf and soccer, but ever since I was growing up baseball has been my favorite. I love baseball,” Stuntebeck said.

Stuntebeck plans to major in nursing in order to become a nurse anesthetist.