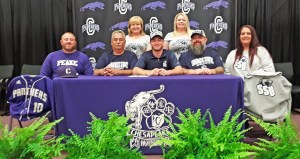 CHESAPEAKE — Just as quickly as he thought his dream was gone, it was brought back into the playing field.

Chesapeake Panthers’ senior catcher Hayden Blankenship was entertaining the hope of playing college baseball. And just when that dream appeared to disappear like a home run ball gong over the wall, it was like Mike Trout reached over the wall and brought it back. 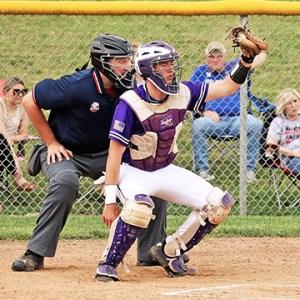 That quick turnaround meant that Blankenship was going to realize his dream as he signed a letter-of-intent Tuesday with the Shawnee State University Bears.

“It was really abruptly. I never really thought I had the opportunity to play baseball in college. I got accepted to Rio Grande, I got accepted to Shawnee, got some mail and talk from Marietta (College),” said Blankenship.

“College was there. I was going to go either way, but I never thought I’d have the opportunity to play baseball which has been my goal and a dream of mine just to continue playing. But it all came really abruptly, really quick. I was really shocked to say the least.”

When the shock wore off and the reality of getting the opportunity to play college baseball sank in, Blankenship began to reflect on his long journey to make his dream come true.

“I’ve been playing for 13 years. I started when I was five and I’m 18 now. I haven’t missed a year. Summer ball, travel ball, whatever it is I just love playing,” said Blankenship.

Catching is not the only position Blankenship has played. Although he prefers that position, he’s open to whatever Shawnee State plans to do if it translates into more opportunities to get on the field for playing time.

“I catch mainly. That’s what I’ve done the last two years of high school. The first two (years) I played first base. I’m pretty flexible with where I’m needed to be. I’m not the fastest, but I have a decent arm. I can play first, third, catcher. Those are my main three,” said Blankenship.

“I talked to the head coach (Phil Butler) for about an hour and he said they were pretty flexible in the catcher position. They’ve got a lot of people similar to me that can play multiple positions,” said Blankenship.

“I don’t figure playing should be an issue. He also said there would be a jayvee squad. I guess college has a jayvee now which is news to me. I wasn’t aware of that. They have a varsity squad and the a jayvee squad so I’d probably get some good playing time there.”

Besides baseball, Blankenship played football and was a lineman for the Panthers. But the 6-foot-1, 210-pounder said his main love was baseball and he pointed right at him grandfather Ed Blankenship for nurturing that love of the game.

“I’ve had a love for baseball as long as I can remember. It came from that man right there, my grandpa. He’s pushed me to be where I’m at today and try as hard as I can for him because he’s got me to have this love for it that I do have,” said Blankenship.

“I played football all through midget league and in middle school I took a couple of years away from it and I came back and played it the last three (years). I think I did pretty well in that. I love football. I love football to death, but it just doesn’t have the deep, down place that baseball does.”

Chesapeake head coach Zacc Russell said Blankenship’s love of playing baseball is on display every time he takes the field and he expects his catcher to be an asset to the Bears’ program.

“Hayden is a good leader. I think he’ll mix in well with those guys there. He tries his best every day at practice He’s encouraging, he’s always trying to get better, so I think he’ll do well up there. He’ll really fit in,” said Russell.

“It’ll take a while to get adjusted to it, but once he gets there and kind of starts practicing and working out, I think he’ll adjust fine to it. His big thing will just be adjusting to the speed of the game.”

Blankenship is planning to major in exercise science.