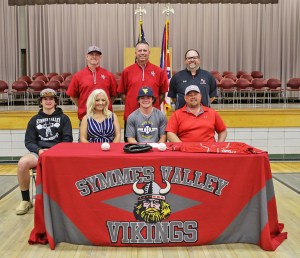 WILLOW WOOD — Who needs an indoor practice facility when you have a bedroom and a batting tee?

Although mom thinks otherwise, Levi Niece was fine with his “facility” that helped make him a better baseball player.

Well, he and his brother Luke were fine most of the time.

“We have a little tee upstairs and I hit a lot. I used to hit a lot of balls everyday just to get ready. (Mom Kayla) didn’t like it because we put several holes in the walls and I’ve had to suffer the consequences. But it’s all worth it,” said Levi Niece. 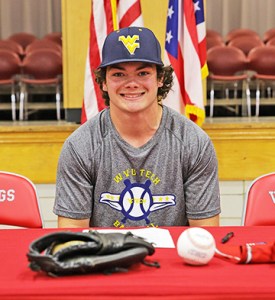 And it was worth it when Niece signed a letter-of-intent Wednesday to play for the West Virginia Tech University Golden Bears.

Symmes Valley head coach Chad Renfroe can attest to the hard work of Niece which he said will help Levi when he goes to the next level.

“He’s been a four-year starter. He works his hind end off. If the building is open, he’s there. If we’re on the field, he’s there. He never missed a day. He’s just a good kid,” said Vikings’ coach Chad Renfroe.

“He’ll play. He’ll probably sit a year or so just getting used to the speed of the pitchers and things changing. It’s a different atmosphere when you get to college.”

When searching through potential colleges, Niece narrowed it down to Kentucky Christian University and Tech.

“I think by far, Tech was my hands down favorite. I loved the way everything was set up and the coaches there are amazing. They’re very friendly and everything I could ask for, so that’s why I made my decision for there,” said Niece.

Although he had to decide on a school, the decision to play college baseball was something that came about four years ago.

“It’s always been — you know, sitting in the living room watching it with my dad (Adam) — it’s always been on my mind to keep going after high school. When I got in high school and started playing with my friends, I realized I don’t want this to end. I want to keep going, so I’m going to make that dream come true,” he said.

Because of team needs, Niece played third base for the Vikings. He said Tech plans to use him as a middle infielder.

“Middle infield is what we’ve talked about so far, but I’ll play anywhere,” said Niece. “I’ve played second, third and short my whole career, so anywhere in the infield.

“Second is my preference. I like second out of all the positions. It’s where I’ve played the longest period of time and I just got kind of used to it there. There’s a lot of action and that’s why I like it. You get to run around a lot, get to balls, you get more balls than third.”

Niece has played both baseball and football all the way from youth league to his senior year. He said it is difficult to decide which one he prefers the most.

“The difference mainly is on your body for me. Football was really rough on my body, but I still loved it with all my heart,” said Niece.

“Baseball is on a different level. Baseball truly does have my heart and I’m going to carry that on through the next four years.”

The talent level will rise at he college level and Niece is well aware of that fact. However, it still doesn’t change his enthusiasm to the next challenge in his life.

Despite putting in a lot of work, Niece knows this hasn’t been a solo journey. He said there were a lot of people to thank for his success.

“I thank Chuck Renfroe, Chad Renfroe, my family has always been there pushing me, my dad and brother coming down to the field and putting in extra work,” said Niece. “Any friends and family who have helped me and all the boys I’ve hung with.”