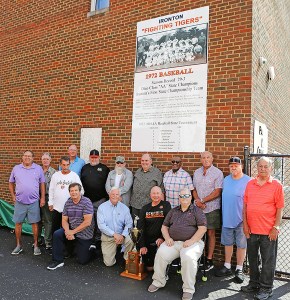 But this bunch of starters and this starting game proved to be more than that. As the theme song for the old Steve Allen Show said, “This Could Be The Start of Something Big.” 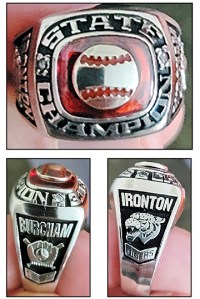 It may have taken 50 years to accomplish, but the players pooled their money to purchase state championship rings for the 1972 Class AA title. Coach Mike Burcham designed the rings. (Photos Submitted)

The Ironton Fighting Tigers 1972 baseball team didn’t just have a great season. It didn’t just win the school its first state championship. It proved to be the start of something big in terms of success for all its programs.

Mike Burcham was the head coach of the Ironton baseball team when it won the Class AA state championship. A former player who later coached for more than 40 years and was the athletic director for 30 years, Burcham said the 1972 team set the athletic program in motion and made players realize they could win a state title.

Jimmy Payne and Jimmy “Cat” Tordiff were the starters in the middle of the infield with Payne at shortstop and Tordiff at second base and both gave credit to that team and Burcham for helping ignite the state title run and the success that followed in all the programs.

“I said back then and I still say it that it wouldn’t have happen without coach Burcham because when you’re coaching you have to have the ability to get the best out of every single player. You have to treat them all differently to get the very best out of all of them. And Mike Burcham — as far as I’m concerned — was and is the best at that,” said Tordiff.

Payne went on to become a teacher and administrator including a stint as the Ironton superintendent. He talked about how much talent was in the school at that time and how his senior class was instrumental in the 9-1 football season and the state title run.

“To me, that’s means a lot that we were a part of something and it’s still going on today. It’s a mental attitude. That’s what it’s all about.”

Attitude. This team definitely had attitude and it showed during the tournament run. In fact, Ironton fell behind in its final three games of the tournament as the Fighting Tigers trailed Steubenville Catholic in the regional finals, Columbus Wehrle in the state semifinals and Solon in the state finals only to rally each time and win.

“We were in Double-A and we were playing school bigger than us. And the last three games we were playing large schools and we were behind and we have to come from behind. Against Steubenville Catholic we were down and came back in the last couple of innings,’ said Tordiff.

“In the state semifinals we played Columbus Wehrle and they were the defending state champs and they had everybody back. They had us down 4-1 in the fifth inning and David Kriebel his a monstrous 450-foot three-run home run to tie it up.

“So, now it’s 4-4 and they come right back and score three and go up 7-4. Now it’s the last inning and we’re behind 7-4 and they’ve got all their fans on top of their dugout surrounding them and they thought they were going rush the field. The trouble was they couldn’t get us out. We scored five runs in the last inning to advance to the state finals.”

Tordiff talked about the state title game from not only 1972, but some information he found out just recently.

“Cleveland Solon fully expected to win that game. They had Phil Francis and Jim Eden — two pitchers with zero point something ERAs — they were both drafted that summer by the Cleveland Indians, and Chris Bando was at second base and played six or seven years (in the majors),”

“I didn’t know this until the last week or so. I got on Facebook and was looking for a film of the game and a guy from Cleveland said I don’t have that but I’ve got a newspaper article that I’ve saved that I’d like for you to see. He got it to me and I don’t know if he was a player or who he was, but it was the Cleveland Plain Dealer the next day after the tournament and their coach Willis Woods was being interviewed and he said ‘we simply never ran up against a team like Ironton. I don’t know what their averages were, but their one through eight hitters were hitters. My hats off to them. We just haven’t ran into anything like that.’ ”

Burcham doubled down on the talent that the Ironton team had not only in the lineup but sitting on the bench.

“We’ve had so many good athletes. We had so many good players that it’s unbelievable. I’ll just say this. They started off 11-3 and they had good players at each position. We had a good team, but we also knew that the opponents we were playing were good. We had the starting pitching. It was outstanding and they could bring the ball. We had hitters and we had fielders and we played well. It was a great bunch of kids and a great bunch of players. Each game they got better and better and better,” said Burcham.

“And it doesn’t hurt when you pick up a pitcher in the middle of the year (Jeff Collins) who’s not going to lose for two years. We had three great pitchers. Really we had five great pitchers. And we guys who could hit the ball. They all wanted to bat first, they all wanted to bat third, and I finally talked them into seven, eight and nine ain’t that bad. You still get to bat as much as the other guys. Hit the ball. It was a great team. There was a DH back then or re-entry. We could have played a lot more guys because we had a bunch of good players on the bench.”

Collins wasn’t with the team at the start of the season but re-joined them midway through the season. With a mid-90s mile an hour fastball and wicked curveball, Collins was just a sophomore who would be drafted by the Chicago Cubs after his senior year.

“I felt like when Sticks (Jeff Collins) came on board, that gave us three quality starters. We had Rick Massey who went 7-1, and Jerry (Murnahan) of course who went 14-0. Other guys had different ideas, but for me that was the thing,” said Payne.

“We had a bunch of guys on the team who played with since we were kids, they fearless and they never went into a game thinking they were going to lose and I think that makes a big difference when you have the mental attitude that no matter where you’re at or who you’re playing that you’re going to find a way to win and I think that’s what we did.”

Ironton came from behind in its final three games of the tournament to win.”

Actually, third baseman Steve Johann agreed with Payne on one incident that he felt was the turning point.

“Coach Burcham had an itinerary that he gave us that listed everything all the way to the state. It was like a mater-of-fact and he was serious. I realized and believed right then we could do this,” said Johann who later played at Marshall.

Tordiff said Payne has pointed toward that same incident as a key moment in the season.

“Jimmy likes to point out that coach Burcham actually having an itinerary in advance of the state tournament and just matter of factly saying here’s where we’ll be at such and such a time on Friday, making it like it was a done deal,” said Tordiff.

“For me, the lightbulb went off when we were 11-3 and and I can distinctly remember over at Beechwood (Park) in front of the — it was a dugout back then it was a bench— and him saying to us almost sarcastically, ‘you know, 11-3’s not bad but it’s not where we ought to be. And that to me ignited an 18-game winning streak. We were 11-3 and ended up 29-3.”

The late, great Cincinnati Reds scout Gene Bennett had a son on the Wheelersburg team, Ironton’s first opponent in the tournament. Bennett talked with Burcham before the game.

Although Ironton had a great group of baseball players, they were all good athletes as well. Payne signed and started as a wide receiver for Mississippi State. Rick Boykin signed and started as a running back for Ohio University. Massey signed to play linebacker for Kentucky only to suffer a bad injury. Keith Parker signed to play baseball at Morehead State which was Division I at the time.

“We got down to double-A and our people started coming,” said Burcham who noted there were 1,125 students at that time but has now dwindled to 400.

Burcham then quipped, “You don’t need coaches. Coaches just get in everybody’s way.”

Even though it was in jest, this time Mike Burcham was wrong. You do need coaches because it takes a team to win.