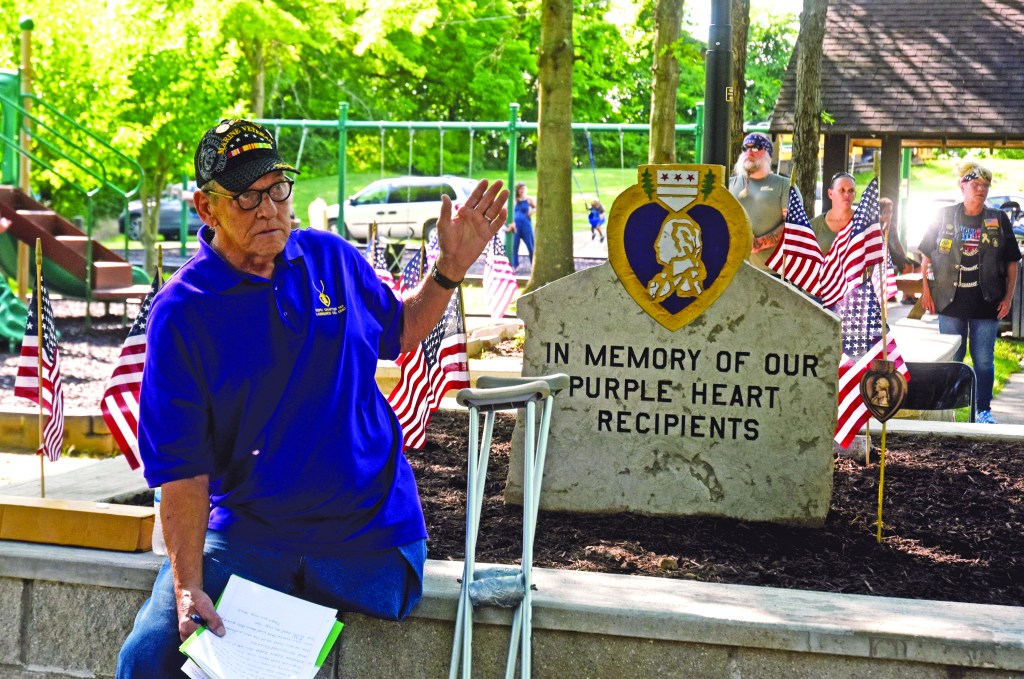 Charlie Meadows, a Vietnam-era U.S. Marine veteran who lost his leg to an artillery shell in Kai San and long-time member of the Order of Purple Heart, is seen at the opening of the Purple Heart monument in Paul Porter Park in Coal Grove in April 2021. Meadows passed away at the age of 75 on May 25. (The Ironton Tribune | Mark Shaffer)

A member of the Lawrence County veteran’s community passed away on May 26.

Charlie Meadows was a Vietnam-era U.S. Marine veteran who lost his leg to an artillery shell in Kai San and long-time member of the Order of Purple Heart.

Chad Pemberton, a pastor and an employee of Phillips Funeral Home, said he has known Meadows for the better part of three decades.

“He is one of my oldest and longest friends I have ever had in my life,” Pemberton said. “I met him when I was 17.”

They shared an interest in cars and Meadows would often help Pemberton work on his hot rod.

He recalls Meadows as one of the most patriotic men that he had ever met.

“There was just something about him. He lost his leg and didn’t come out bitter, he didn’t come out angry. He just kept living his life,” Pemberton said. “He understood why he gave his leg. He understood and he didn’t take it for granted that he was still alive. He told me on several occasions that he had been left for a purpose.”

In July 1968, just days away from getting to go home, Meadows’ unit was attacked in the Battle of Khe Sanh, Vietnam. He was given an honorable discharge from the Marines as a combat veteran and was awarded the Purple Heart, a Bronze Star and a Presidential Citation in recognition of his service to his country.

Meadows married Linda on Dec. 31, 1968. He enjoyed telling people that they married on New Year’s Eve so he could start the new year right.

Pemberton said that Meadows gave back to his community, and especially veterans, because he felt that it was his duty.

Meadows was a long-time member of the local Purple Heart Society and served as its president. He was a grand master of the Ironton–Lawrence County Memorial Day Parade and was recently honored by Col. Oliver North for his service to his country.

“Anything the veterans needed, Charlie was there. Anything,” Pemberton said. “I don’t care if he was sick, if he needed to do something for the veteran community, he was right there. He was one of the first in line to help.”

Meadows was instrumental in the decision to get a Purple Heart marker placed in Paul Porter Park after renovations were done last year.

Part of the display was a marker for his friend, Curtis Crum, who was killed in Vietnam on Dec. 1, 1968. Crum’s name rarely came up and Meadows wanted him to be remembered.

“It touches my heart deeply to see this,” Meadows said of the monument.

Pemberton said Meadows worked for years to get recognition for Crum.

“That is a good example. He was relentless in his pursuit of making sure veterans got what they deserved,” Pemberton said.

Visitation for Meadows will be from 11 a.m.–1 p.m. Wednesday at the Tracy Brammer-Monroe Funeral Home, 518 S. Sixth St., Ironton, with a service to follow officiated by Pemberton. After the service, a graveside service, with full military honors, will be held at Woodland Memorial Cemetery, 824 Lorain St., Ironton.