A ‘gem’ of an employee retires 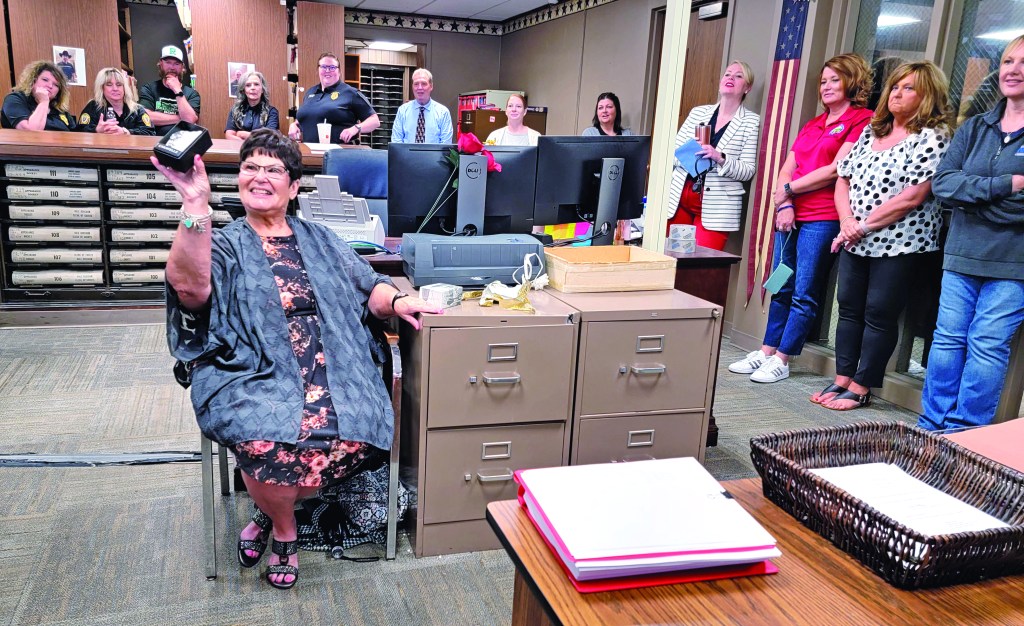 Donna DePriest, who retired after 47 years in the Lawrence County Clerk of Courts Office, shows off a watch that her fellow clerks bought for her during her retirement party on May 26. (The Ironton Tribune | Mark Shaffer)

On Thursday, the Lawrence County Clerk of Courts office had a retirement party for one of its longest running employees as they celebrated the retirement of Donna DePriest after 47 years of being a legal clerk for the Common Pleas Court.

There was cake, lunch, hugs, a few near-tears and presents of a silver watch, a photo blanket with pictures of everyone in the office and two Blenko Glass sun catchers, made in blue and yellow.

“She’s a great worker, a gem because you don’t find employees like that often,” said Clerk of Courts Mike Patterson. “I’m losing a big piece of this office.”

Patterson said that she worked well with them and it didn’t matter if they were a member of the public or a lawyer or a judge.

“I’m heartbroken, to be honest,” he said. “I came into office in 2009 and right off the bat, I knew I had a gem. I’ve shed a few tears over this, because it broke my heart. She isn’t just an employee, she is a friend.”

Somebody else who will miss her, at least at work, is Rhonda Brown, the office’s deputy clerk. She and DePriest are first cousins, so they won’t fall out of contact. Brown started working with her 44 years ago.

“Life has been good,” she said. “I will miss her here, but I will still see her all the time. She’s easy to work with and she’s just a good person.”

DePriest started the job at the Clerk of Courts straight out of high school and said it was time for her to retire.

“I just felt it was my time to go,” she said. “There are so many changes and the older I get, the less I like change. So, I was just ready to try something new.”

And is that something new a different job?

“No,” she said with a laugh. “No, I am not going to get another job. Nope. I’m just going to spend time with my daughter and my grandkids and just enjoy my life.”

She said she was emotional about leaving, but she would be back to visit, every once in a while.