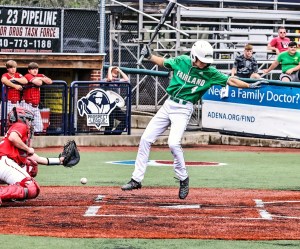 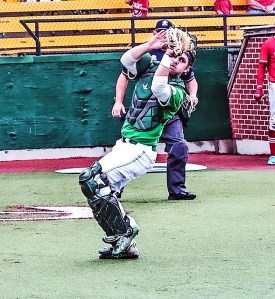 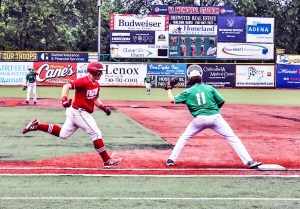 Fairland Dragons’ first baseman Ethan Wall (11) grabs the throw ahead of Minford’s Aodhan Queen for an out during Thursday’s Division 3 regional semifinal win over the Falcons. (Photo by Katie Keeney)

CHILLICOTHE — As Sonny and Cher once sang, “And the beat goes on….”

The Fairland Dragons won their 16th straight game as they rallied in the final two innings for nine runs and beat the Minford Falcons 10-3 in the Division 3 regional semifinals at Veterans Memorial Stadium.

“At the end of the day, it’s defense and pitching. That’s what it takes,” said Fairland coach Michael Hill who once pitched Fairland to the regional finals.

“This deep (into the tournament), everybody is good. We took advantage of them walking us and making some errors.”

The Dragons (21-5) will now face Liberty Union at 3 p.m. on Friday in the regional finals at Lancaster’s Beavers Field. Liberty Union edge West Lafayette Ridgewood 2-1 in the second game on Thursday.

The regional champion will advance to the state semifinals at 4 p.m. Thursday, June 9, at Akron’s Canal Park.

Minford took a quick 2-0 lead in the bottom of the first inning.

J.D. Matiz flared an infield hit up the middle that was grabbed by Dragons’ second baseman Alex Rogers who made a nice play but the throw was late and it was an infield hit.

Carson Cronin followed with a base hit and Adam Crank put down a sacrifice bunt to give Minford runners at second and third.

Aodham Queen hit a sacrifice fly to centerfield, Michael Book walked and pulled off a double steal with Cronin who scored for the second run.

The Dragons cut the deficit in half with a run in the top of the fourth..

Niko Kiritsy was hit by a pitch leading off and went to third on a double by Cooper Cummings. Minford starter Cole Borland got a infield pop out and Kiritsy was thrown out at home trying to score on a ground ball by Alex Rogers, but he uncorked a wild pitch that allowed the run to score.

The Falcons (18-9) got the run back in the bottom of the inning when Noah Martin beat out and infield hit leading off and went to second on a throwing error. After a ground out, Branson Alley singled home Martin.

But despite a couple of minor threats, the Falcons offense was shut down the rest of the game.

Fairland rallied to take the lead with three runs in the top of the sixth.

With one out, Kiritsy doubled down the left field line. Cummings was intentionally walked but Blake Trevathan crossed up the strategy with a fly ball that fell for a double when the right-fielder gave way to the center-fielder who had to make a long run and couldn’t catch up with the ball and both runners scored to tie the game.

“Our team has a bunch of guys who can do the same thing hitting. It’s a next-man-up mentality. We always preach do your job,” said Hill about Trevathan’s stepping up for the big hit.

After an infield pop fly for the second out, Tyler Sammons hit a high chopper to shortstop and the throw pulled the first baseman off the bag on a controversial call and there were runners on the corners.

Ethan Wall then hit a ground ball that was misplayed for an error allowing the go-ahead run to score and the Dragons led 4-3.

Rain interrupted the game for more than an hour in the top of the seventh inning forcing a delay in play.

But the weather didn’t stop the Dragons from generating a six-run rally to put the game away.

Brycen Hunt beat out an infield hit leading off and Blaze Perry followed with a bunt that rolled along the foul line and Minford catcher Matiz picked up the ball but didn’t make a throw and the hit went for a single putting Fairland in business with two baserunners to start the inning.

Kiritsy reached on an error to load the bases and after the rain delay Cummings walked on four pitches sending Hunt home for a 5-3 lead.

Trevathan followed with a sacrifice fly, Rogers beat out an infield hit up the middle to drive in a run and put runners on the corners.

Sammons beat out yet another infield roller down the third base line to load the bases. Wall then walked on four pitches to force home another run and it was 8-3. Hunter Lykins hit into a force out at second base as a run scored.

Sammons went the distance to get the win as he gave up six hits, three runs with two earned, struck out two and waked four.

Borland worked six innings and took the loss. He was touched for five hits, five runs of which four were earned, struck out three, walked one and hit two batters.