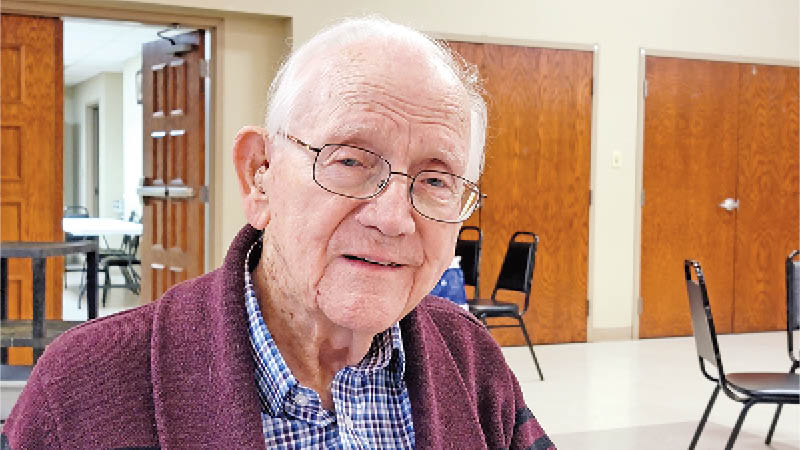 Richmond has done a lot in his 102 years; he’s been a farmer, a soldier, a baker, a teacher, a librarian and a choir leader. He wrote children’s books and gospel songs for his church, Zoar Baptist in Coal Grove.

He even wrote a marching song called “Wheels on Ohio’s Highways” for the Ohio State Highway Patrol.

Richmond had an extremely humble beginning; he was born in a tent along the Elk River near Charleston, West Virginia. He and his parents and two brothers and two sisters lived in the tent for several months before joining other family members in Silver Hill, located in West Virginia’s panhandle.

As a young man, he helped run the family farm, doing chores like cutting firewood, feeding the animals, milking cows and carrying water from the creek to the house. He also helped the postman to deliver mail and transport passengers from town to town.

While a Magnolia High School junior, he contracted rheumatic fever and was bedridden for two years. He graduated high school and then Uncle Sam called him to serve his country.

He set sail from San Francisco on a captured German ship and was taken to the South Pacific war theater.

His job was to be a baker and help feed the men in his outfit as they traveled to Australia, New Guinea, Wake Island, Morotai and the Philippines to help service the Air Corps bombers.

“I had to bake 300 loaves of bread every day. And it was on a field kitchen, so it wasn’t easy,” Richmond said. But a bit of ingenuity and help made his job easier.

On one ship, he was admiring a Navy baker’s bread pans, which were designed to bake five loaves at a time.

“I said ‘If I had the bread pans like you’ve got, I could do my bread a lot easier,’” Richmond said. “When we were getting ready to leave at the last port we pulled into, he said ‘I got something for you. Open your shirt.’ He gave me one of the five loaf pans.”

Turns out that the pan was too wide for the field kitchen. So, Richmond gave it to some mechanics that cut off part of the pan, turning it into a four-loaf pan that fit perfectly into the oven.

“And then, they made me two more out of aircraft aluminum. And those were actually better than the one the sailor had given me,” Richmond said.

The same mechanics helped out with his wood-burning stove that was on a trailer to make it mobile.

“I told the guys I can’t be out hunting up wood for it. They said they would take care of it,” he said. “They worked on it and, when I got it back, it ran on 60 octane automotive gasoline.”

In return for their generosity, the same mechanics would find loaves of bread and a tin of jelly waiting in their tents when they got off work.

“They’d be going through the food line and they would just grin at me,” Richmond said. “I was always well liked. I helped keep them well fed.”

After the war ended, he came back to the Tri-State and got a job at Heiner’s bakery.

He found that it wasn’t to his liking.

“I soon realized I couldn’t just do something so repetitive. In the Army, I had to do it and the guys needed the bread,” Richmond said. “When I found out I could go to Marshall College on the GI Bill, I took that.”

“I majored in history, but I liked music better,” Richmond said.

He got a job teaching history at Crum High School, but he started teaching music because of a bunch of rowdy kids.

teaching singing at noon,” Richmond said. “I said I would be glad to. One of the teachers played the piano and I taught them music.”

It was in 1950 he met a young woman named Phyllis McKnight, of Coal Grove.

In 1951, he started teaching at Rock Hill High School and married Phyllis. They made their home in Coal Grove. They had two daughters, Paula Faye and Tammy. The family started attending Zoar Baptist Church in Coal Grove and he began a music program there, leading the youth choir. (After 55 years, he still attends the church when he feels well enough. He currently lives in Barboursville with his daughter, Tammy.)

It was at Dawson-Bryant that Richmond was asked by State Rep. Carlton Davidson to compose a marching song for the highway patrol.

The teacher and the Dawson- Bryant High School Mixed Choir performed “Wheels on Ohio’s Highways” at the OSHP Academy’s graduation in 1968.

“I was kind of a biggie that year,” Richmond said, with a chuckle.

He was at Ironton schools from 1971-1986 as the high school librarian, the audio-visual director and yearbook advisor.

“I liked being a librarian with everything so orderly,” Richmond said. He was also a librarian at Ohio University and spent 10 years repairing audio-visual equipment for both Ironton and Dawson-Bryant schools.

When Richmond hit 100 years of age, Zoar Baptist had him come back for a special night.

“I didn’t really know what they had planned. Well, I got there and they wanted me to get up and direct the choir,” he said. “Well, I looked at the choir and what the preacher had done, which was marvelous, he had gotten the youth choir people together. I stepped up there, they were all smiling and I said ‘Hey, you guys are my youth choir!’ We did the songs I had written. It was great.”

As for being this year’s honorary grand marshal, Richmond said he thinks it is great.

“I’d like to thank the parade committee, the City of Ironton and Lawrence County for this great honor of being the honorary grand marshal of the 154th Memorial Day parade,” he said. “It is an honor to represent the service members who came before me and will come after me, as America has always been worth fighting for.”