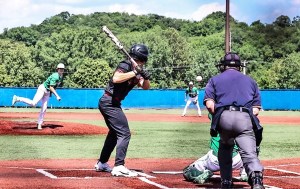 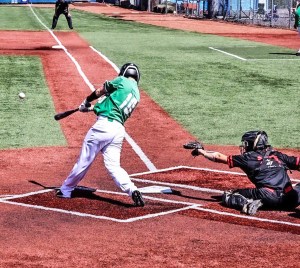 Fairland outfielder Blaze Perry (10) connects for a double in the seventh inning to drive in the Dragons’ only run in the 3-1 loss to the LibertyUnion Lions during Friday’s Division 3 regional championship game. (Photo by Katie Keeney)

The Dragons have had good pitching and defense with clutch hitting throughout their tournament run including the Division 3 regional final game Friday against Liberty Union.

Despite the good effort, the Dragons suffered a heartbreaking 3-1 loss to the Lions to end their state tournament hopes prematurely.

Jon Wheeler pitched a complete game for the Lions as he scattered seven hits, struck out eight, walked one and the one run was earned.

The Lions got two runs in the fourth inning and one more in the seventh for the win.

In the top of the fourth,  Miller doubled home a run and then Austin Ety followed with an RBI single to complete all the scoring in the inning.

The Lions got an insurance run in the top of the seventh and the Dragons got their only run in the bottom of the inning on an RBI double by Blaze Perry.

Brycen Hunt was 2-3 for Fairland.