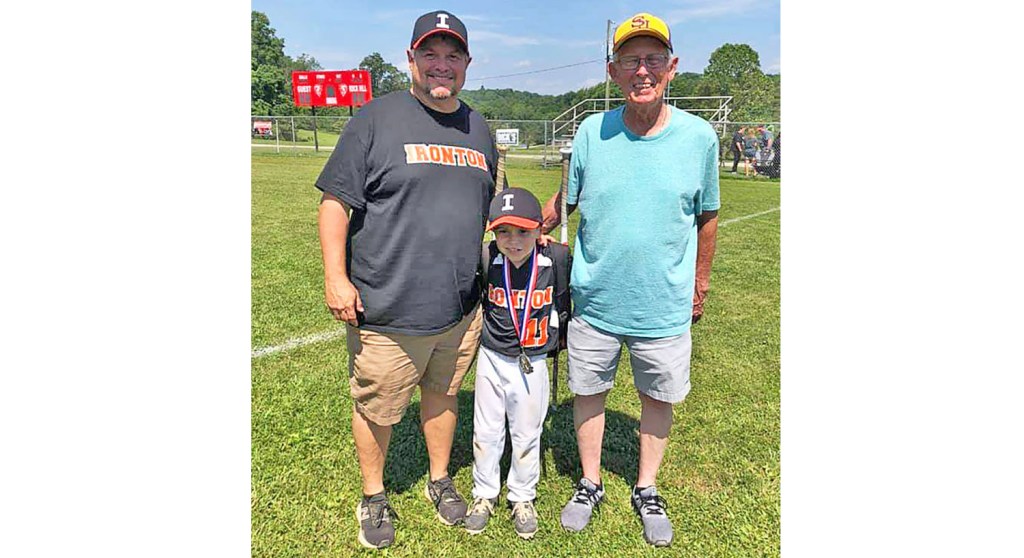 Anyone ever involved in the little league baseball programs knows the drill. First comes registration, then tryouts followed by the coaches’ draft.

And this goes on through each age division from 5-to-16 years of age with some league even having a 17-18 age divisions.

But once you’ve ran out of eligibility, your time with the little league has been exhausted as a player.

If someone so desires, they may volunteer as a coach, manager, umpire, scorekeeper or as a concession worker.

When Joe Holtzapfel was drafted into the Ironton Little League, it was by Tommy Tipton as a coach for his team. That was 50 years ago and Holtzapfel’s eligibility as a volunteer remains on the active list.

Now 82 years old, Holtzapfel was honored for his years of service by throwing out the league’s opening day first pitch this season and the catcher on the receiving end was his grandson Mason Holtzapfel.

Although his first year was five decades ago, Holtzapfel’s memories of his start seem like they just happened yesterday.

“My first trip down there was with (his son) John when he was 10 years old. He was wanting to try out, so I took him down there. My goodness, there were close to 200 kids trying out for 30 spots on six teams,” said Holtzapfel.

“I told John not to get his hopes built up too high and that the odds were not in his favor. Well, that night Moe Thomas called John and told him he drafted him on the Henry Cooke Mets.”

What seems like a happy ending was merely the match lighting a long fuse.

Holtzapfel was doing some yard work later that evening when his neighbor Tommy Tipton who owned Tipton’s Grocery and Bakery happened to walk past his home. Holtzapfel took the opportunity to talk with Tipton about how many kids tried out and how many were picked and how many went home disappointed.

“I told (Tipton) it was a shame they had to send so may back to the Recreation Department,” said Holtzapfel.

A year went by and Holtzapfel had pretty much forgotten his conversation with Tipton, but little did he know it hit a nerve. Tipton came walking down the street to talk with Holtzapfel.

“Tommy said he had just come from a little league meeting and they decided to expand the league to eight teams. He told the board he would sponsor one of those teams, the Astros,” said Holtzapfel. “They said they would find him a manager and he told them he had one. He informed me that I was that manager.”

And so it really began.

Obviously during the past 50 years, Holtzapfel has come into contact with hundreds if not thousands of people.

One such person was another longtime volunteer Jimmy Mahlmeister who not only played in the Ironton Little League, he later coached and served as league president. Mahlmeister said he crossed paths with Holtzapfel often.

“I played for Dean McDonald on the Expos and I remember Joe and Mr. Larry Holtzapfel coaching the Astros,” said Mahlmeister.

“Around 1986, I began coaching senior league with Joe’s son John. While I coached with John, Joe was a board member and was always around to help us when John and I were coaching all-star teams together.”

Mahlmeister spent 15 years as a member of the board and as president and Joe Holtzapfel was still helping out as a volunteer.

“It was very important to our league financially to host post-season tournament games. Joe was always willing to help out as a scorekeeper or in the concession stand or wherever he was needed,” said Mahlmeister.

“Most people choose to help only while their kids are involved, but Joe was one of those volunteers who was always just a phone call away regardless of whether or not his kids or grandkids were playing. Joe has always been supportive of the kids of Ironton in every sport and has been a great asset to the Ironton Little League.”

Holtzapfel remembers everyone who has even a volunteer or crossed paths at the little league. He said everyone had the same mindset that they were there to help the children. There was no personal glory expected.

“When you work for kids, you do it because of the kids and for no other reason. That was really why I went down to Vesuvius Street,” said Holtzapfel.

“I have served under a few district administrators such as Al Mann, Judge Ralph Mullins and Glen Seagraves,” said Holtzapfel. “I have coached in every league but girls, but I did help with keeping a scorebook for the St. Joseph girls’ softball team. I have had the privilege of coaching all-stars in the minor league, little league and senior league. Dean McDonald and I coached the first 10-year-old Little League District 11 Championship ever that was held at South Point.”

When Smith was the president of the league, Holtzapfel remember the time the league went looking for pocket change and ended up with the bank vault.

“Harold Smith and I attended a C.A.O. (Community Action Organization) meeting one evening. They said they had some money they would like to give us to help with finances. They had $50,000 and were willing to give us $5,000 of it,” said Holtzapfel.

“With the help of a lovely lady by the name of Pauline Sanders and another neighbor of mine, Ron Thomas, we would walk out of there with $50,000. That is how the concession stand and equipment building along with the minor league field were built.”

One of the projects that was among his fondest memories was obtaining lights for the league. The project started rather quietly and then just exploded like someone flipped the switch on 100 lightbulbs.

“In one of my wildest moments, I was sitting in my office at Tipton’s and I picked up the phone and called Ironton Mayor Bill Sheridan. I asked Bill if he might have some money that we could use to install lights on the little league field.

I thought if we had lights we might be able to start a girls’ league, too,” recalled Holtzapfel.

“Well, Bill informed me he had $40,000 for recreation in that end of town but it was going to require a lot of leg work. With the help of president Frank Collins, we got the paperwork done and I got West Virginia Electric to bring in Musco Lighting, the people who lit the Statue of Liberty, to install the lights.”

Holtzapfel said he could fill pages and pages with all the great teams, the players, the coaches and volunteers. He said they are the people who need to be thanked.

“There is so much history and tradition. How can we not be proud of our kids?” said Holtzapfel. “The kids I started with in 1972 still call me coach. It’s not the wins and losses, it’s the one thing all coaches need to shoot for: respect. That’s the key to success.”

He also said the league couldn’t exist without the sponsors who support the kids. “People tend to forget how valuable their contributions are to the league’s survival,” he said.

Not every memory was a major project or a major financial contribution. In fact, Holtzapfel said the things that really stand out for him are the smaller but very needed contributions. He said there were people who volunteered and did work and wanted no thanks.

“Those people just understand it takes a village. I can remember Jim and Katie Lutz when I first started at the league and they were weed eating, painting fences and doing little things. It’s people like them who make the league run smooth,” said Holtzapfel.

“I still see folks now just busting it to get things done. Johnny Hughes, Wayne Kidd, Gary Murnahan, Nick Medinger and, of course, my son John. They know who they are. They don’t look for recognition. They always said, ‘look, there is

Joe in his happy place,’ and you know, they are right.”

And Joe Holtzapfel has been in his happy place for 50 years.