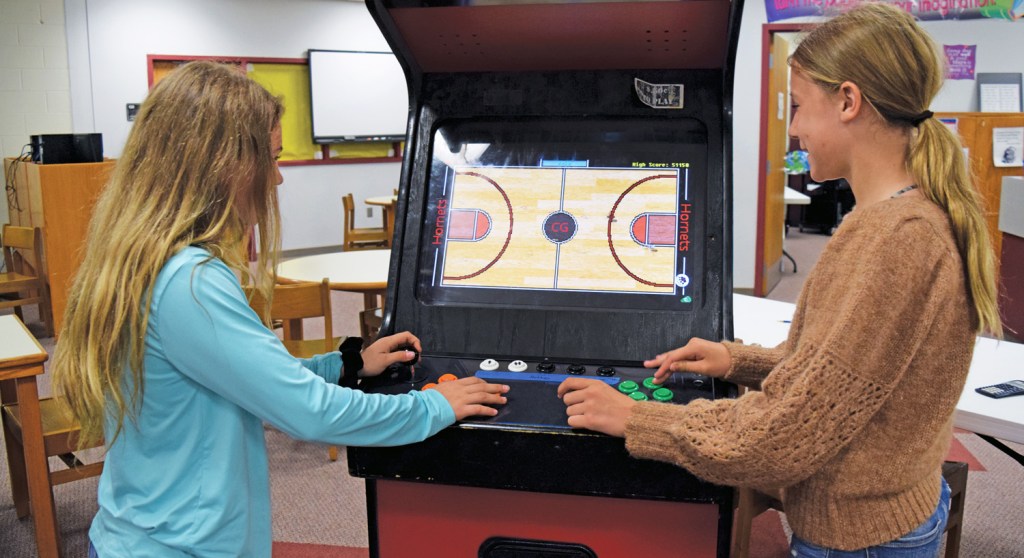 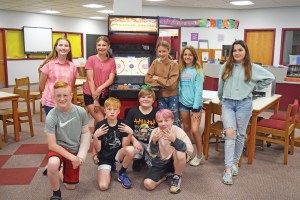 Sixth grade students at Dawson-Bryant Middle School gather around the arcade cabinet hosting the game their class created as part of the technology program. (The Ironton Tribune | Heath Harrison)

COAL GROVE — In the 1980s, children and teens flocked to arcades in shopping malls, where they spent a constant flow of quarters for a turn at games like Pac-Man, Q*bert, Donkey Kong and Frogger.

Now, a generation later, their counterparts in this decade have an edge on them, with the ability to design their own arcade games, something students in the sixth grade technology class at Dawson-Bryant Middle School took part in this last school year.

Teacher Andy Lovejoy said three classes, comprised of about 50 students, worked on the project to create the game The Hornets Nest. 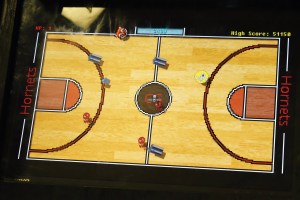 The first step was designing the art for the game “First, we started off creating pictures on a PC,” Addison Myer, student in the class said. “And some were done on an iPad.”

Lovejoy said that every piece of artwork used in the game was designed by the students using a mouse or stylus. “And then put in coding,” student Haili McKnight said of the second phase of their work. 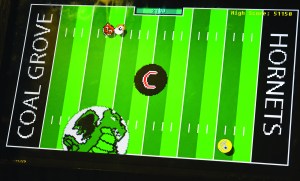 A large Fairland Dragons logo is a level boss that the Coal Grove hornet must defeat in the arcade game, The Hornets Nest, designed by sixth grade technology students at Dawson-Bryant Middle School. (The Ironton Tribune | Heath Harrison)

The result was a game in which players operate the school’s mascot, a hornet, on screen and launch stingers at the mascots of rival schools on screens with a basketball court or football field as backdrops. “You can play it as one or two players,” Myer said.

At the end of each level, the player must defeat a large version of another mascot, acting as the boss for that portion of the game. “Those take 50 hit points to beat,” McKnight said.

Lovejoy said, of the school mascots, it takes a few points more to beat one from Ironton. “Because Tigers are tough,” he said.

The game was loaded onto an arcade cabinet that was donated by a neighbor of the school’s principal, Rick Roach. “It was a gutted cabinet with 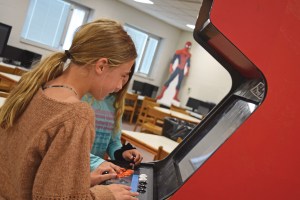 no motherboard,” Lovejoy said. The students said Lovejoy worked on the cabinet in preparation for the game. “He fixed all the buttons and controls,” McKnight said.

Lovejoy said they used GameMaker Language for the coding and that, as the students mastered it, they began tinkering with the coding to give themselves more firepower and extra lives in the game. 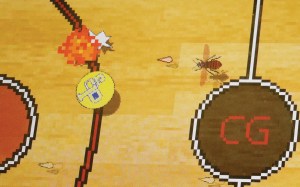 Players operate a Coal Grove hornet in the arcade, The Hornets Nest, designed by sixth grade technology students at Dawson-Bryant middle School. The hornet, the school’s mascot, defeats logos of other school by projecting stingers at them. (The Ironton Tribune | Heath Harrison)

“It was pretty fun at the end,” Myer said of the experience, to which McKnight said it became less difficult each day.

Lovejoy said the program is seeking more donations of cabinets and he is proud of the work the students put in. “I’m so proud of them,” he said. And the project allowed them to work as a team, student Alexa Porter said. “The best part is that we all pulled together to make this,” she said.