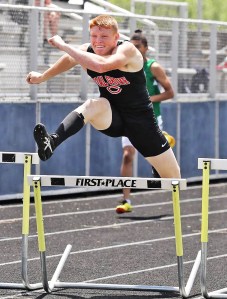 The Coal Grove Hornets’ junior turned in an impressive performance on Saturday at the Division 3 state track meet as he placed third in the 110-meter hurdles.

Hall ran a 15.09 time to place third behind a pair of seniors, Collin Has Abed of Grandview Heights and Beau Brungard of Springfield Local in meet held at Jesse Owens Stadium on the campus of Ohio State University.

Hall had the eighth fastest time in the preliminaries on Friday with a time of 15.45 seconds.

Hall also ran in the 300-meter hurdle preliminaries on Friday and had a 41.90 time and did not finish among the top nine places to qualify for the finals.

The Hornets’ senior Perry Kingrey threw in the discus event on Friday and had a toss of 137-3 but did not place. 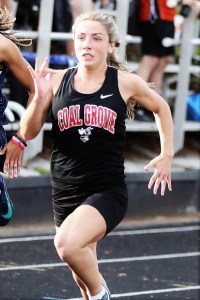 Hall wasn’t the only Coal Grove runner to place in the state meet.

The Lady Hornets’ sophomore Kylie Montgomery was seventh in the 400-meter dash with at 59.97 seconds. Junior Sydnee Sinn of Wayne Trace won with a time of 55.92.

Ironically, Montgomery had the seventh fastest qualifying time as well at 59.56 seconds.

The Lady Hornets had two runners in the 300-meter hurdles. Sophomore Maddie McDaniel was sixth at 45.09 seconds and senior Kylee Thomas was ninth at 46.35 seconds.

The Lady Hornets 4×100 relay team of senior Kelsey Fraley, Olivia Kingrey, Montgomery and McDaniel ran in the preliminaries on Friday and posted a time of 51.81 seconds but did not qualify for the finals.

However, the Lady Hornets 4×400 relay team of Montgomery, Kingrey, Hamm and Thomas ran a 4:01.60 to finish on the podium in fifth place. The quartet had a 4:05.35 time in the preliminaries on Friday.

Also running in the preliminaries was the Lady Hornets 4×200 relay team of McDaniel, Kingrey, Hamm and Montgomery who posted a 1:48.19 time.

The Lady Pointers’ 4×400 relay team of senior Karmen Bruton, Layne, Hall and Wilburn posted a 4:28.33 time in the preliminaries but did not qualify for the finals.

This marked the first time in 25 years the Lady Pointers sent participants to the state track meet.

In the Division 2 meet Saturday at Jesse Owens Stadium, Rock Hill Redmen senior Tyson Lewis was seventh in the 100-meter dash with a 10.98 clocking. Lewis ran a 10.75 time in the preliminaries.

The winner was Ryne Shackelford of Keystone with a 10.62 time.

The Ironton Fighting Tigers’ 4×200-meter quartet of senior Peyton Wilson and juniors Larondo Carter, Chianti Martin and Ethan White had a 1:32.25 clocking but did not make the finals.

The Fairland Dragons’ senior Devon Bellomy cleared 6-foot-2 and was 13th in the high jump. Sean Kaminski of Huron cleared 6-6 to win the event.