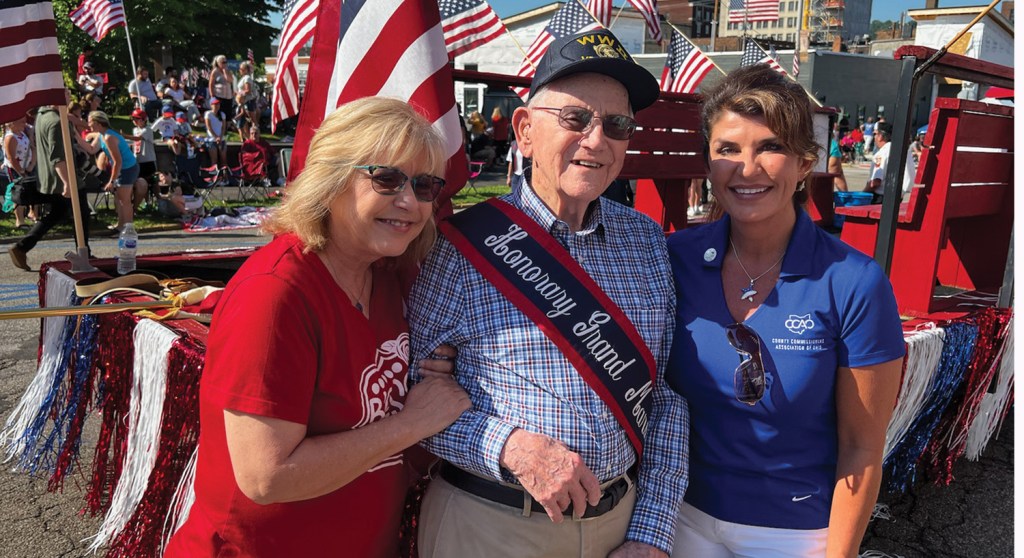 Lloyd Richmond, center, the honorary grand marshal of this year’s Ironton-Lawrence County Memorial Day Parade, was honored by the Lawrence County Commission at its meeting on Thursday. (Submitted photo)

Was presented with courthouse flag at parade

Richmond, 102, a World War II veteran, lives in Barboursville, West Virginia, but was a longtime resident of Coal Grove and former teacher and librarian in Lawrence County Schools.

Prior to the parade on Monday, Holliday said she, representing the commission, presented Richmond with a flag flown over the Lawrence County Courthouse.

“He was just witty and it was a pleasure to meet him,” she said. “It was a highlight of Memorial Day. It was a privilege to share a little time with him and his daughter.”

Holliday said Richmond has made an impact on many lives, having worked in the Rock Hill, South Point, Ironton and Dawson-Bryant school systems. She said the library at Dawson-Bryant contains books by Richmond recalling his life experiences.

“He was willing to share it and put it down in print and that will carry on for many, many generations,” she said. “He has made such a tremendous impact and, when you say his name, you’re not surprised when someone tells you a Lloyd Richmond story.”

• Approved a status change for Mason Dalton from part-time to full-time paramedic.

• Accepted the resignation of Mark Click from Lawrence County EMS.