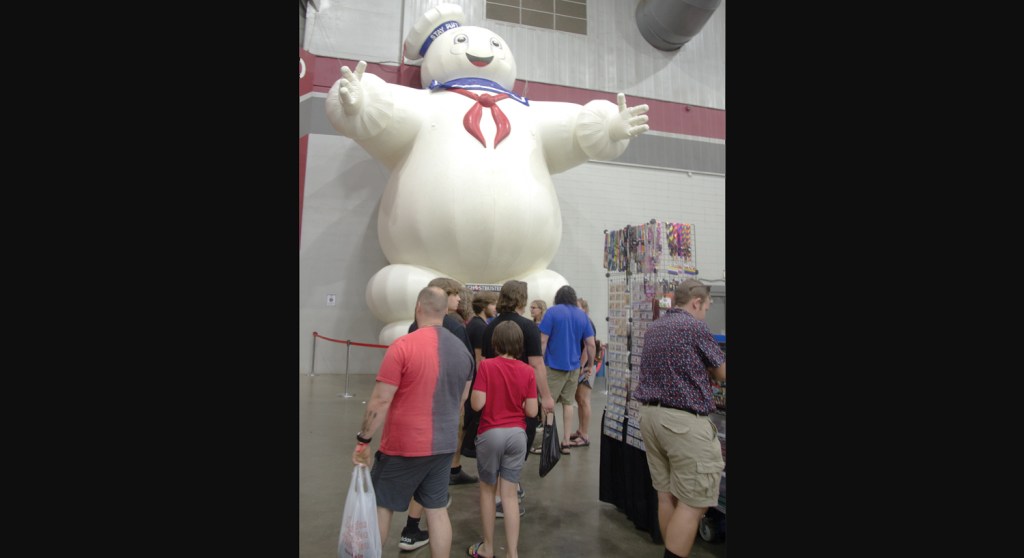 Organized by Jarrod Greer, owner of The Inner Geek comic shop in Huntington and Ashland, as well as the Lexington (Kentucky) Comic & Toy Convention, the event has its roots in Tri-Con, which launched about a decade ago.

Since Greer has headed up the event, it has expanded to include more guests, as well as incorporating Pullman Square and other parts of downtown for events, such as costume contests and a vendor fair.

The floor for this year’s event was filled with vendors selling not just comics and toys, but collectibles from all genres of pop culture.

The rear of the arena was reserved for meet and greets and photos with visiting celebrities, including Chuck Norris, star of many martial arts films and television’s Walker, Texas Ranger; David Koechner, a comedian whose work includes Saturday Night Live, The Office and the film Anchorman; and Kevin Conroy, the voice of Batman in several animated adaptations of the character.

The event was also host to comics creators, such as Mike DeCarlo, an artist best known for his inking work for DC Comics in the 1980s, and Beau Smith, of Kenova, West Virginia, a recurring guest and Marshall University graduate who has written for multiple companies and is the creator of the character Wynona Earp.

And one of those who had a booth in Huntington for the weekend is one of the most influential figures in the medium. 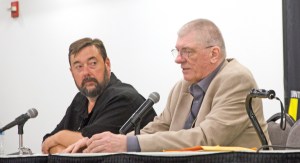 Jim Shooter, the former editor in chief of Marvel Comics, got his start in the industry at age 14 in 1965, when he wrote and drew stories of the DC characters The Legion of Superheroes and submitted them to the company.
DC, after decades as the powerhouse of the industry, had fallen behind the newly-launched Marvel Comics under Stan Lee. Shooter’s approach to the Legion incorporated much of the style of Marvel and his work was quickly purchased by editor Mort Weisinger.

Shooter worked for both companies in following years, in between his time at college and a series of menial jobs.

In 1975, he was hired as an assistant editor at Marvel and, within three years, ascended in the company to become its editor in chief.

Shooter’s time at the company is celebrated for restoring it after production delays and other issues had put it in decline, creating a system of royalties for its creators, as well as for his overseeing some of the publisher’s most acclaimed output in its history, including runs by Walt Simonson on Thor, Chris Claremont and John Byrne on The Uncanny X-Men, Frank Miller on Daredevil and Roger Stern on The Amazing Spider-Man.

While taking part in a question-and-answer forum on Saturday, fans asked Shooter about some of the key events of his nine-year tenure of the company, including a storyline in his final year in which Spider-Man married his longtime girlfriend, Mary Jane Watson.

Shooter said it came about after he was asked by Stan Lee, who co-created the character with artist Steve Ditko, to appear at a convention with him. A fan at a similar Q&A brought up the subject, asking if the company would finally allow Spider-Man’s alter ego, Peter Parker, to marry.

Shooter said that Lee, who had by then left daily operations at the company to work in Hollywood, deferred to the company’s current head.

“He turned to me and asked, ‘Can we do it, Jim?’” Shooter recalled.

And put on the spot, Shooter agreed. The wedding issue in the comics, which coincided with a similar story in the newspaper strip by Lee, was a landmark in the industry, preceding a similar move by DC with Superman by a decade.

During his time overseeing Marvel, Shooter launched a number of profitable new titles, such as X-Factor and licensed books for toylines such as G.I Joe and Transformers.

The writers of latter two, a tie-in with Hasbro, created and developed the characters for the brands, which have been the basis for two popular film franchises.

But likely, the centerpiece of Shooter’s tenure at the company was the limited series, Marvel Super Heroes Secret Wars, developed with toy company Mattel, who sought to release action figures of some of the comic company’s most popular characters. 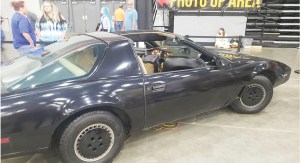 A replica of the car K.I.T.T. from the television series Knight Rider was one of many exhibits at the Huntington Comic & Toy Convention over the weekend at Mountain Health Arena. ( Mark Williams | For The Ironton Tribune)

The book was the first company-wide crossover of its kind and featured a huge cast of the most prominent heroes and villains at Marvel, unprecedented in its scope.

Given the number of characters involved, Shooter assumed the role of writing the book, which was a massive commercial success and established concepts used in the company’s stories to this day.

Fans asked if the 1984 story, in which the cast is transported to alien world by an all-powerful being, The Beyonder, and led to do battle, would be featured in the Marvel Cinematic Universe series of films.

Shooter said he has heard this is likely.

“I just hope they get everything right,” he said, but noted that changes always come in adaptation.

For an example, he pointed to The Incredible Hulk, a character whose 1962 origin was based on scientist Bruce Banner being caught in the test of a gamma bomb.

“There hadn’t been an above ground nuke test for decades,” he said, stating it had to be changed for present day film adaption.

Shooter said sometimes changes made by studios can be odd, such as when the Hulk was adapted into a television show in the 1970s.

He said television executives felt the characters name of “Bruce” was “not manly” enough (something that puzzled him), and asked for a change.

Shooter said Marvel then pointed out that his full name was “Robert Bruce Banner” and suggested “Bob Banner.”

“But it turned out one of the executives was named ‘Bob Banner’ and they said, ‘No,’” Shooter recalled, stating the character on the show ended up as “David Banner.”

But, whatever changes are made, Shooter said he expects his signature series to find its way to film.

“I’ve talked to industry friends, and they feel it’s happening,” he said.

The Huntington Comic & Toy Convention is set to return to the arena next year.