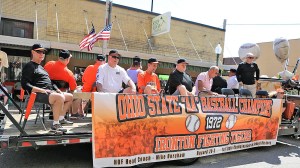 If author Thomas Wolfe, the originator of the quote “You can’t go back home,” had been a third base coach, then plenty of members of Ironton High School’s 1972 Class AA state championship baseball team would have run through his “stop sign” at third on their way home to celebrate their historic accompaniments, 50 years after the fact.

The Fighting Tigers “Never Say No” team fashioned a 29-3 record on their way to the “AA” Ohio High School Athletic Association baseball crown.

During the Memorial Day weekend, former teammates and coaches gathered at various venues to remember their title winning season.

On Saturday after an earlier unveiling of their team picture and season recored portrait along Tiger Alley at Tanks Memorial Stadium, the team was saluted with a banquet at The Depot in downtown Ironton.

With approximately 75 in attendance including 13 layers long with head coach Mike Burcham and assistant coach Tom Castle, and family members representing some of the team’s players who have passed away over the years, team and individual contributions to the school first-ever team state championship were recognized.

Ironton’s all-time wins leader as head coach pointed out that “everybody in our lineup could hit.”

Notable hitting feats among the regular lineup and reserve role players were shared by Burcham.

The coach recalled how strong his batting order was game in and game out, and that there were plenty of good players o this bench who could very well have been regulars for Ironton or any one number of other area high school teams.

An Ohio High School Hall of Famer as a baseball coach and athletic director praised the ’72 team’s pitching staff, reminding the audience that “Anybody who knows anything bout baseball knows you win with pitching, pitching, pitching,” and then adding “We had some good ones.”

He mentioned ace right-hander Jerry Murnahan’s 14-0 record that season plus an additional six saves including the state championship; the addition of fireball pitcher Jeff Collins and his 95 mile-an-hour fastball and sharp breaking curveball that included six innings and the win in the state title game; Rick Massey’s 8-1 mark and the key performances the team received from an especially deep pitching staff.

The champions were also saluted with a video tribute re-creating the seventh inning of the title-wining game against Solon.

The crowning moment of the evening was the presentation of championship rings to players present and to family members representing some of the players who have passed away: Steve Massey, Greg Rogers, Keith Parker, Tino Boll and Jeff Collins.

Mr. Wolfe most likely could not have taken into account the strong ties an Ironton championship team and its coaches can maintain over 50 years. Going back home was the perfect way to celebrate.

(Rick Mayne is an Ironton native and 1973 graduate and former radio sportscaster.)