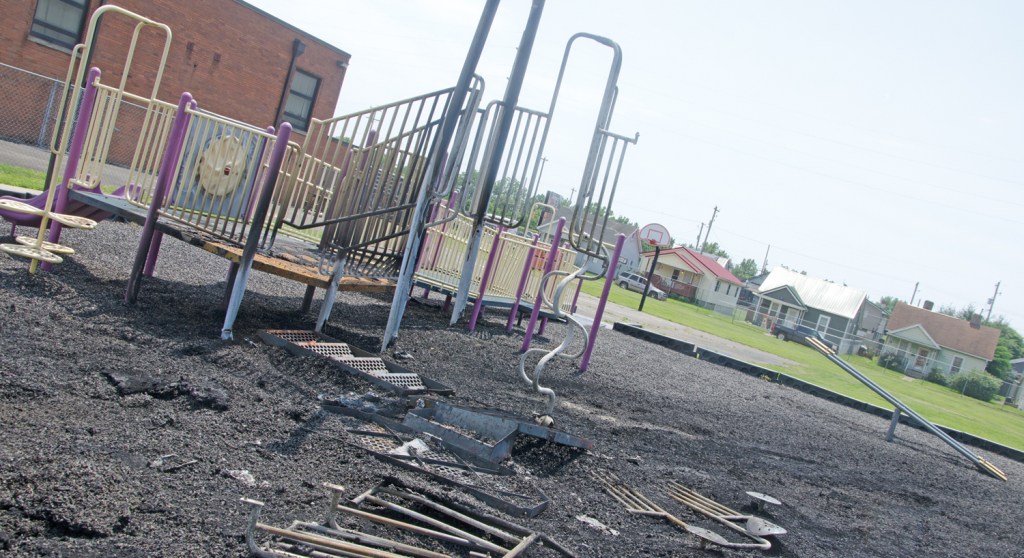 The playground at the former Open Door School on Lorain Street in Ironton was ruined by a fire on Sunday morning. (The Ironton Tribune | Heath Harrison)

On Sunday, the Ironton Fire Department was called out to fight an unusual fire — a playground fire.

Around 11 a.m. on Sunday, the IFD were called to the former Open Door School at 421 Lorain St. and found the shredded rubber mulch on fire, which created thick black smoke as it burned.

IFD Captain Jeff Joseph said the fire is under investigation and they are looking for juveniles that may be involved.

“There were some juveniles down there and the next thing that everyone knew, the playground is on fire,” he said. “We are investigating because we don’t know what we have right now. But we do know that juveniles were there right up until the fire got called in.”

Joseph said when the fire fighters arrived the plastic playground equipment was on fire and while there was a lot of smoke, it didn’t take long to put out the fire.

But it did destroy the slides, the dome and the plastic shade covers.

“It has ruined that whole playground. Just guessing, I would say that it is probably around $20,000 in damage done,” Joseph said.

He added they are now canvassing the neighborhood and seeing if any home security cameras captured the incident.

If anyone is identified and determined to have purposely set the fire, the case will be turned over to the Lawrence County Prosecutor’s Office to see if there is enough evidence for a criminal case to be prosecuted.

“That would be up to Brigham Anderson,” Joseph said. “If it was an accident, they shouldn’t have just ran off, they should have told someone. If it was set on purpose, that is a different matter. We are trying to figure that out at this time.”

Anyone with information about the case can contact the Ironton Fire Department at 740-532-0043.