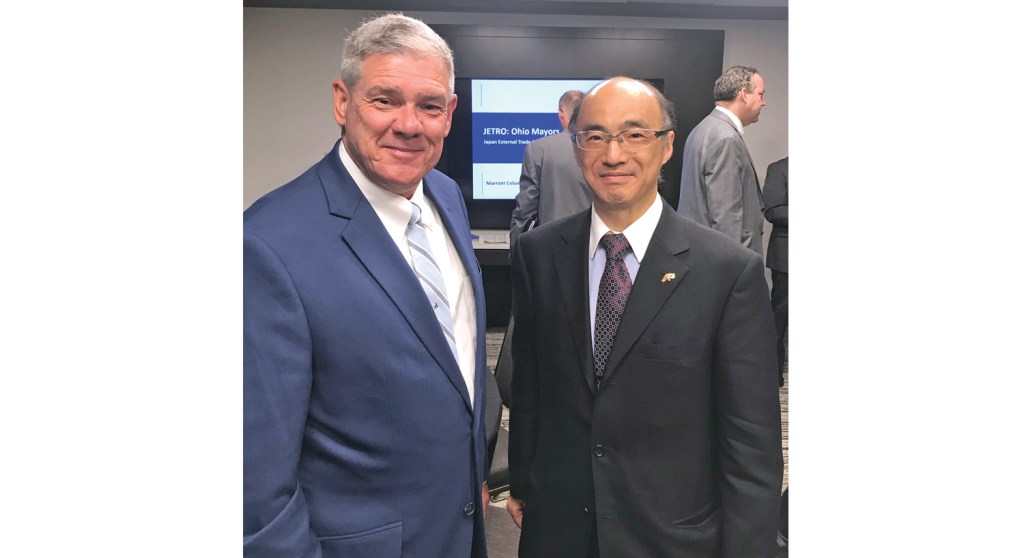 COLUMBUS — South Point Mayor Jeff Gaskin was among 15 mayors in Ohio who met with a trade group from Japan on Wednesday, seeking to spur investment in Lawrence County.

The session was part of the annual Mayors Association of Ohio conference, which took place in Columbus and included 100 mayors from across the state.

“I spoke with the director and staff of the Chicago office,” Gaskin said of his meeting with representatives from the Japanese External Trade Organization. “Things went well enough that they are going to visit Lawrence County.”
Gaskin said he made his pitch not just for South Point, but the Tri-State area as a whole.

Gaskin pointed to the region having two universities, as well a multiple vocational schools.

Gaskin said he was part of a group who met the Japanese delegation for an early breakfast and then they spoke with him individually.

“One of the important things is that South Point is in the conversation,” he said. “I showed them the attribute we have that I think they are looking for — we are a safe community, have the education, a labor force of 400,000 and logistics — we are 10 minutes from I-64.”

Gaskin pointed out the rail service, with the Norfolk and Southern Heartland Corridor “going right through South Point,” and the river dock at the The Point Industrial Park.

“We have seven miles of track in the industrial park — the South Point and Ohio short line railroad.”

The meeting must have made an impression on the group, as Gaskin pointed out that when the conference met in general session, Yusuke Shindo, the consulate general of Japan, mentioned Lawrence County and South Point specifically.

“So we are in the conversation,” he said.

Gaskin said there are more than 450 Japanese companies operating in Ohio, employing more than 66,000 people.

He pointed to areas that have seen benefits, such as the Toyota plant in Georgetown, Kentucky, where he said workers can make up to $38 an hour.

“How many kids’ mouths does that feed and how many house payments does that make?” Gaskin said.

“Sam and I have spoken about forming a Tri-State mayor’s association, to pull knowledge and expertise,” Gaskin said. “He and I want to work to bring together mayors of the Tri-State.”

Gaskin also met on Thursday with the Mayors Partnership for Progress, a smaller group, comprised of mayors from southeastern Ohio.

He said one of the main topics of discussion at the meeting was the $500 million investment in Appalachian Ohio proposed by Gov. Mike DeWine and passed by the Ohio General Assembly last week.