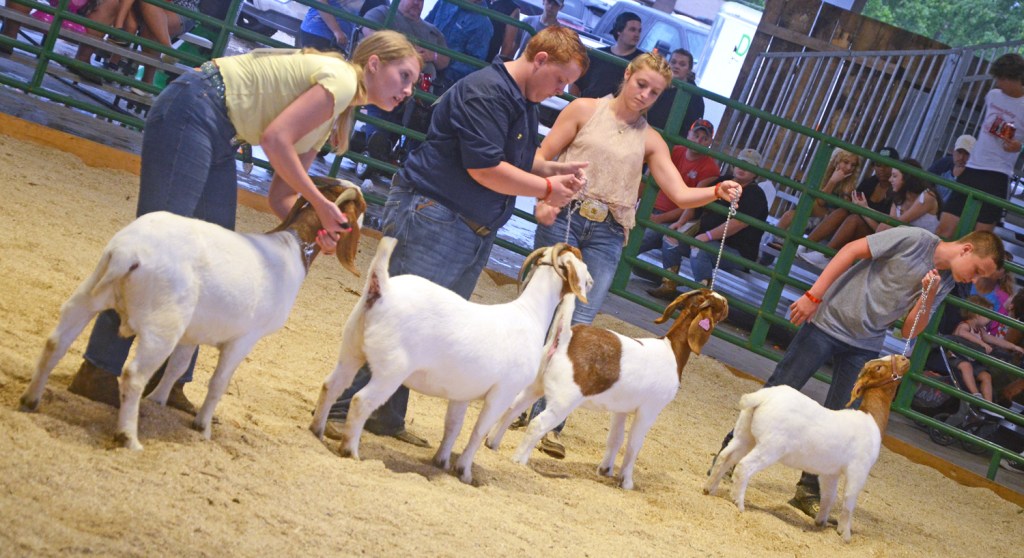 Competitors present their animals to the judge during the 4-H and FFA goat competition at the 2021 Lawrence County Fair. This year’s fair is set for July 9-16 at the county fairgrounds in Rome Township. (The Ironton Tribune | Heath Harrison)

ROME TOWNSHIP — With the conclusion of the Memorial Day parade, the county is gearing up for its other big annual event, with the Lawrence County Fair, set to return in less than a month.

Organizers have a full line up of grandstand acts planned for this year’s event, set for July 9-16 at the county fairgrounds in Rome Township.

Chris Collier, vice president of the fair board, said this year will feature a new amusement ride provider, as well as more fairway entertainment.

The Dino-ROAR! Touring Dinosaur Show, which was extremely popular at last year’s fair, will be returning, and this year will be expanded to five days, beginning Tuesday of fair week.

The Cincinnati Circus, who have appeared at the fair for several years, will have its performers back on Tuesday of fair week, entertaining crowds with aerial and fire stunts.

Collier also said that a petting zoo, originally slated for last year, will be coming to the fairgrounds, running from Tuesday through Saturday of fair week, while there will be truck pulls, a rodeo and other recurring acts coming back, as well.

Collier also wanted to address a rumor that has been making its way around the county. Contrary to what is being said, the fair is not changing locations next year and will continue at the fairgrounds for years to come.

Collier said the rumor began circulating when ground was broken on the new Lawrence County Senior Center at the fairgrounds earlier this year.

As he points out, the building, set for completion in the fall, will actually be made of use to the fair each year.

“It’s even being painted in our colors,” Collier said. “It has bathrooms on the back that will be used during the fair. There has been some bad info out there.”

He noted that construction on the new facility, located behind the grandstand, will be halted this year during fair week and the area closed off.

He said, when it opens, it will have no negative impact on the fair’s operation and will be used each year.

— For more information on the fair, visit https://www.facebook.com/lawcofair. And a full schedule and more will be available in our annual fair guide, included with an upcoming edition of The Ironton Tribune.