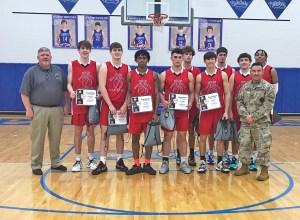 COAL GROVE — Sometimes the paint on the side of a house fades under the constant rays of a burning sun.

But a new coat of paint restores that bright color and makes everything look good again.

So it was with Coal Grove Hornets’ boys head basketball coach Kevin Vanderhoof.

Honored by being chosen as a coach for the Division 3&4 South team in the Ohio High School Basketball Coaches Association’s annual North/South All-Star Game, Vanderhoof was proud and humbled by his selection.

Then COVID-19 hit and the sports world was shut down. And with that closure came collateral damage, which in this case was the cancellation of the North/South All-Star Game.

In the blink of an eye, Vanderhoof’s smile faded like that paint on the side of the house.

The 2020-21 season was played in its entirety and the OHSBCA decided prior to the season to keep the same coaches from the previous year and Vanderhoof accepted the invitation for the second time.

However, that game was canceled as well leaving Vanderhoof in limbo once again.

“I was a little disappointed. The first year they canceled the season and it was such a big honor to coach in that game. It was probably a once in a lifetime opportunity for me,” said Vanderhoof as he thought back to the first cancellation.

“The next year they emailed me in the fall and said they were going to keep it the same. They asked me if I still wanted to do it and I said absolutely. And then they played the whole season and the tournament and canceled the North/South Game.”

Then came the 2021-22 season and the third time proved to be the charm.

Vanderhoof was able to paint a new smile this past spring when the North/South All-Star Game returned and the Coaches’ Association honored the selections of coaches from those two lost seasons.

“I told my wife if they offered it to me again, I was going to do it. But if they cancel it again, I’m not going to continue doing this. Felt it was a good thing that they let us continue to have the opportunity,” said Vanderhoof.

When it came time for the North-South weekend, Vanderhoof piled his Party of 5 family into the car and headed for Olentangy Liberty High School only to find an immediate problem.

Vanderhoof arrived around 3:30 p.m. on Thursday and was informed about a half hour later that his assistant coach would be unavailable due to a death in the family. The team practice was at 5 p.m.

“My assistant coach was my little boy (Luke). He sat on the bench with me and he had a blast and the players up there really took to him. We had fun. It was a fun experience,” said  Vanderhoof.

The Division 3-4 South team only had nine players available and each one was a district player of the year. To get players equal playing time, coaches would rotate five new players every five minutes.

“They tell you every five minutes. So based off practice, I thought who my five starters would be, and then five minutes in I left one of them in and subbed four guys in and left a different kid in each time,” said Vanderhoof.

The South lost 138-118 in a typical All-Star Game free-scoring affair which caused Vanderhoof to winced momentarily.

“I grit my teeth. I don’t like it when you don’t play defense. But it’s more fun for the kids. I watched the first game and it was the same way. It’s an exhibition. The last two minutes was nothing but alley oop dunks and all that stuff. You just get out of each other’s way and let them do what they want. It was definitely different,” said Vanderhoof.

“That was good to have a couple of guys from our area and to be able to coach them,” said Vanderhoof.

Overall, Vanderhoof said it was an enjoyable tie for not only him but his wife, Melanie, daughters Kasey and Kalli as well as Luke.

“We made a weekend of it. It was a good time. It was a good experience for my little boy. The players said they want to see him up here in eight years or whatever. I appreciate those guys taking to (Luke). There was a boy Chase Ouelette from Wellington who really took to Luke. We had a great time and it was something that I’ll never forget. You get to coach the best of the best,” said Vanderhoof.

“But, I’m ready to get back and coach the Coal Grove kids.”

And Vanderhoof won’t have to wait two more years to do that job.