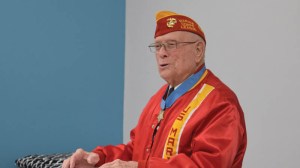 After the U.S. Marine and West Virginia native was awarded the Medal of Honor for his service at Iwo Jima in World War II, he took that honor seriously and strove to represent it to its fullest potential.

Whether it was working at the Veterans Administration hospital in Huntington (which now nears his name), appearing in parades and at veterans events or speaking to local schoolchildren, Williams sought to honor others who served and offer inspiration to those who might serve, whether through the military or through other careers.

And through his foundation, he made it a personal mission in his later years to honor Gold Star Families across the nation, working with those who had lost a family member in service, establishing scholarships and erecting memorials.

In his his selfless actions on the battlefield or his dedication in his civilian life, his 98 years were about as well spent as any person could have done and we join the Tri-State and nation in mourning his passing.