Wrap it up – Veterans Service office gets new used vehicle 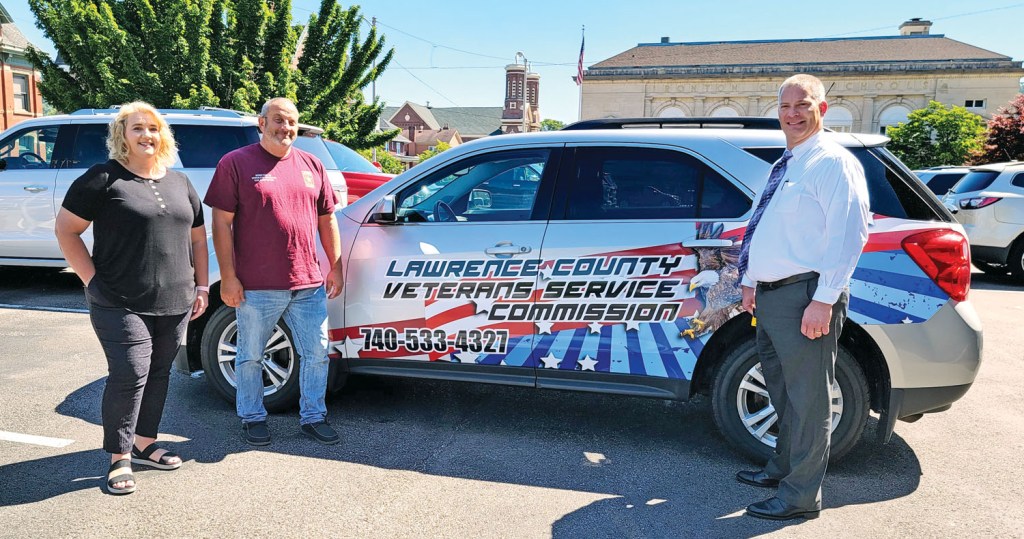 During the pandemic, it became obvious to Tim Carpenter, the Lawrence County Veterans Service officer, that his office needed a vehicle to better serve his clients.

“The need arose when COVID-19 started shutting down some of the services that the Huntington VA provided, which was transportation,” he explained.

So, he went to the Lawrence County Commissioners to see what could be done about getting a vehicle to provide transport for veterans.

County Auditor Paul David Knipp was at the meeting and thought he might have a solution for the veterans office and his own office. He explained that the auditor’s office had a 2012 Chevy Equinox that they used to go to state meetings and for the office’s real estate inspectors when they were out in the field.

“It has a few years on it, but it doesn’t have a lot of miles on it,” Knipp said. “And it is not good for a car to sit, so we were in the process of looking at changing out vehicles because of the age vs. miles issue. Then, when this came up, we were in a financial position to replace our car and give the veterans office one that they would use a lot more frequently than we do.”

“It really helped us out,” he said.

The veterans office got the SUV in mid-April and then had a graphic wrap put on it so people would know who they were.

“That way when we do home visits throughout the county, it’s kind of billboard for who we are,” Carpenter said. “And a lot of our clients are widows and they are a little more comfortable when they can easily identify us, instead of us pulling up in one of our personal cars and not knowing who we are.”

The wrap was completed in time to be in this year’s Ironton-Lawrence County Memorial Day Parade in May and Carpenter was happy to be there since he got to drive the parade’s honorary grand marshal Lloyd Richmond, a 102-year-old veteran who served in the U.S. Army Air Corp’s 336th Air Service Squadron during World War II.

“So, we got to drive Mr. Richmond in the parade,” Carpenter said. “That was quite an honor.”

The Lawrence County Veterans Services office’s mission is to help veterans and their surviving spouses get the benefits they are entitled to.

The office was created after World War II to help veterans file paperwork for assistance through state and federal programs and help guide them through the red tape of bureaucracy. The office serves well over 1,000 people a year.

The office has two veterans service officers, Carpenter, who has been there for seven years, and Teresa Brown, who started last October.