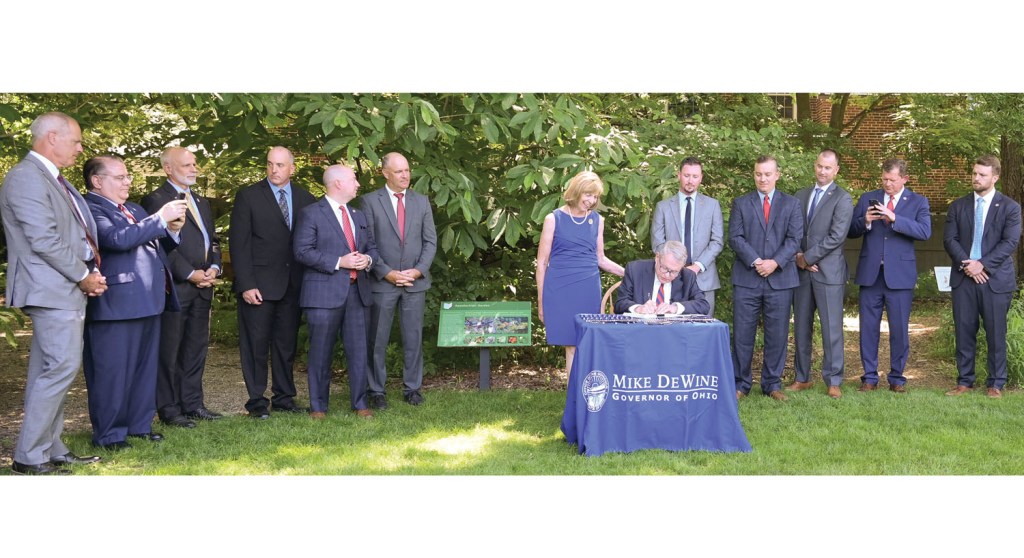 Ohio Gov. Mike DeWine poses with officials from the state’s 32 Appalachian counties as he signed the $500 million investment package for Appalachia into law on Tuesday. (Submitted photo)

“As I stated during my State of the State address, this is Appalachia’s time,” DeWine said. “With this investment, we will be securing a better future for this region.”

Several officials from Lawrence County and the surrounding region were on hand for the ceremony, including State Rep. Jason Stephens, R-93, of Kitts Hill, and South Point Mayor Jeff Gaskin.

As the planning phase of the investment begins, Gaskin said it will important for entities in the county to collaborate during the process, which will lead to a higher likelihood of securing funding for needs.

“No single will be scored highly,” he said. “It is imperative that political subdivisions in the county work together. We have to work together so that Lawrence County is part of the conversation.”

The grant process will be administered by the Governor’s Office of Appalachia within the Ohio Department of Development. Funding will be available through multiple planning and development application rounds until all funds have been awarded.

“This historic investment has potential for lasting change in our Appalachian communities,” Lydia Mihalik, director of the Ohio Department of Development said in a statement.

“We’re grateful to Governor DeWine, Lt. Governor Husted and the state legislature for prioritizing this region and committing the funding to make a real impact.”

The bulk of the funding for the Appalachian investment comes from federal funds from the American Rescue Plan ACT (ARPA), a COVID-19 stimulus package, which was passed in 2021.
ARPA was signed into law by president Joe Biden, after passing Congress on a party line vote with Democratic support. All Congressional Republicans opposed the legislation.

The funding contained in the state bill, which was sponsored by Rep. Thomas Hall, R-53 of Madison Township, and Rep. D.J. Swearingen, R-89, of Huron, will go toward DeWine’s “OhioBuilds — Small Communities, Big Impact — A Plan for Appalachia.” The governor proposed the plan in April for local projects with three priorities:

• Health care, such as investments in school- or community-based services to address physical and behavioral health

Dewine’s office said the $500 million investment in Appalachia allocated as part of House Bill 377 is on top of more than $645 million in investments by their administration since 2019 and is more than twice as much as this year’s entire Appalachian Regional Commission budget covering 13 states.

“OhioBuilds — Small Communities, Big Impact – A Plan for Appalachia” includes a $50 million planning phase to allow Appalachian communities and regional partnerships to develop transformational plans that incorporate each of the three aforementioned priorities. Following the planning, $450 million in implementation grants will be awarded to help communities and regional groups carry out projects that rejuvenate the region and stimulate economic growth.