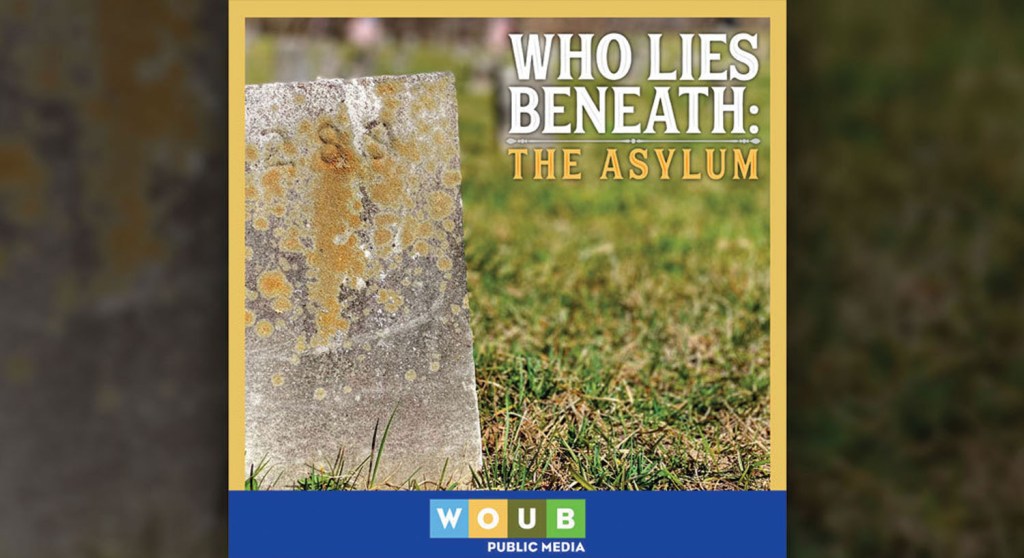 ATHENS — WOUB Public Media is preparing to launch a new podcast that will shed light on some of the mystery surrounding the cemeteries at the old Athens Lunatic Asylum in southeast Ohio, now known as The Ridges. WHO Lies Beneath: The Asylum gives names and voices to those who were buried there under numbered tombstones.

“The asylum grounds in Athens contains three cemeteries where approximately 1,900 patients who weren’t claimed by their families when they died were buried. Many of those who were unclaimed were buried under numbered tombstones, with no names or dates on them,” host and co-producer Cheri Russo said. “This was common practice with many state and national mental health and medical institutions at the time. This podcast is about restoring dignity and respect by giving a voice to those who were voiceless.”

Using records from the asylum, Russo and retired library archivist Doug McCabe will tell listeners about the life stories of the people who were buried under those numbered tombstones.

Each person will tell their own story using a first-person style account with the help of voice actors.

“We don’t know for sure why numbered tombstones were used for those who were buried on the Asylum grounds. It was likely an economic decision,” McCabe said. “But all people, no matter what struggles they may have gone through in life, deserve to have their name on their tombstone. It’s about giving them dignity and respect.”

“Being able to hear the people tell their own stories with the help of voice actors showcases the power of audio storytelling,” said audio supervisor and podcast co-producer Adam Rich. “It helps those listening realize that these were real people, with real life stories who had struggles, but also had names, names that should be on their tombstones.”

“These individuals did not have a voice in life,” Russo said. “By using voice actors on this podcast to tell their story, we are giving them a voice now.”
McCabe spent many years digging through old documents to link the names and life stories with the numbers on the grave markers.

On the podcast, listeners will also hear from descendants of those buried on the Asylum grounds, as well as other researchers, doctors and mental health experts who talk about the history of mental illness and facilities like the Athens Asylum and why people were admitted there.

The first episode of the limited series podcast will be release on July 28.

Listen to a short preview on Apple Podcasts at https://apple.co/3MhA5zK

WOUB podcasts are available on Apple Podcasts, NPR One and Stitcher.

You may also find WOUB podcasts on the NPR Podcast Directory -https://www.npr.org/podcasts/organizations/s567 or woub.org/listen