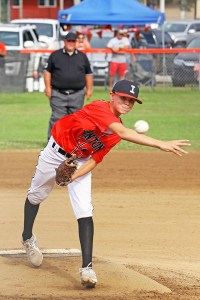 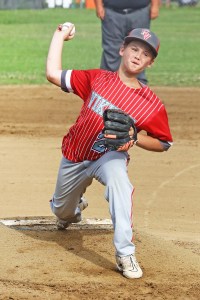 Now that’s how you cross that bridge when you come to it.
The Ironton Little League 11-12-year-old All-Stars were facing elimination on Tuesday, but they were able to get past that situation thanks to Jarrod Bridges.
Needing a win to force a winner-takes-all game on Wednesday, Bridges pitched a two-hitter and went 4-for-4 at the plate with a triple and four runs batted in as the ILL beat the Symmes Valley Little League 10-0 in five innings.
The two teams meet at 6 p.m. Wednesday for the District 11 title
Bridges also struck out 12 and did not walk a batter in getting the complete game win.
“He hit and pitched really well,” said Ironton coach Keith Frazer.
The ILL took a 2-0 lead in the first inning as Silas Ginger singled, Chase Freeman reached on an error, Bridges singled in a run and Freeman scored on an RBI ground out by Ayden Justice.
The lead went to 5-0 in the second inning.
Roman Moore was hit by a pitch, Noah Jones singled and both moved up on a sacrifice bunt by Barrett Waginger.
The sacrifice paid off as Ginger walked and Freeman and Bridges followed with RBI singles.
Waginger reached on an error, Ginger hit into a force play to start the fourth inning but Bridges tripled to make it 6-0.
The ILL ended the game an inning early with four runs in the bottom of the fifth.
Beckett Townsend walked, Moore was hit by a pitch for the second time, Jones was safe on an error to load the bases and Levi Deer grounded out as a run scored. Ginger, Freeman and Bridges all followed with RBI singles.
Ginger was 2-3 with two RBI, Freeman 1-3 with two RBI, Jones 1-2, Justice an RBI and Moore scored a pair of runs.
Symmes Valley 000 00 = 0 2 3
Ironton 230 14 = 10 8 2
Jackson Fields and Austin Simpson. Jarrod Bridges and Beckett Townsend. W-Bridges (IP-5.0, H-2, R-0, K-12, BB-0). L-Jackson F (IP-4.2, H-8, R-10, ER-3, K-4, BB-4, HBP-2) Hitting-SVLL: Bronx Carpenter 1-3, Levi Russell 1-2; ILL: Silas Ginger 2-3 2-RBI, Chase Freeman 1-3 2-RBI, Jarrod Bridges 4-4 3B 4-RBI, Ayden Justice RBI, Roman Moore 2-HBP 2-R, Noah Jones 1-2.