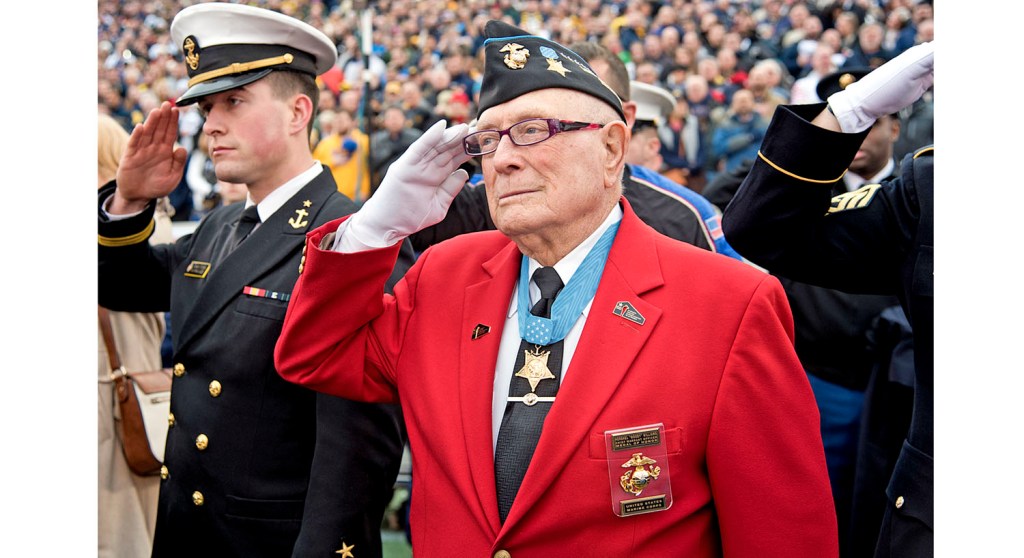 WASHINGTON, D.C. — Hershel Woodrow “Woody” Williams, the last Medal of Honor recipient from World War II and a Tri-State resident, will lie in honor in the U.S. Capitol.

U.S. Speaker of the House Nancy Pelosi, D-California, and Senate Majority Leader Chuck Schumer, D-New York, made the announcement for the honor on Sunday.

Williams, of Ona, West Virginia, received the Medal of Honor from President Harry Truman in 1945. Williams died at age 98 at the Veterans Administration hospital in Huntington bearing his name on June 29.

“Woody Williams embodied the best of America: living a life of duty, honor and courage,” Speaker Nancy Pelosi said in a statement.  “His fearless valor at Iwo Jima and throughout the Pacific Theater helped power an American victory over fascism in the Second World War and earned him a deeply deserved Medal of Honor.  When Woody lies in honor under the Capitol Dome, it will be with immense gratitude for his service that the Congress will pay tribute to this legendary hero — and all of the patriots who fought for our nation in World War II.”

Schumer hailed Williams as “an American hero who embodied the best of our country and the greatest generation.”

“This is only a small tribute to someone who has made as impactful contributions to America as Woody and all our brave soldiers who fought against tyranny and defended our country in World War II,” he said. “Whether it was for his acts of bravery in combat or his tireless advocacy for all veterans and their families, Woody made our entire country, especially his fellow West Virginians, proud.”

Pelosi’s office said the honors for Williams, set for Congress’s return from the holiday, will also serve as a tribute to all who fought in World War II.

Williams lied in honor in the Capitol in his home state of West Virginia on Saturday and Sunday. A memorial service took place at the Culture Center in the Capitol Complex on Sunday.

A private burial service will take place for family at a later date.