From cadet to officer 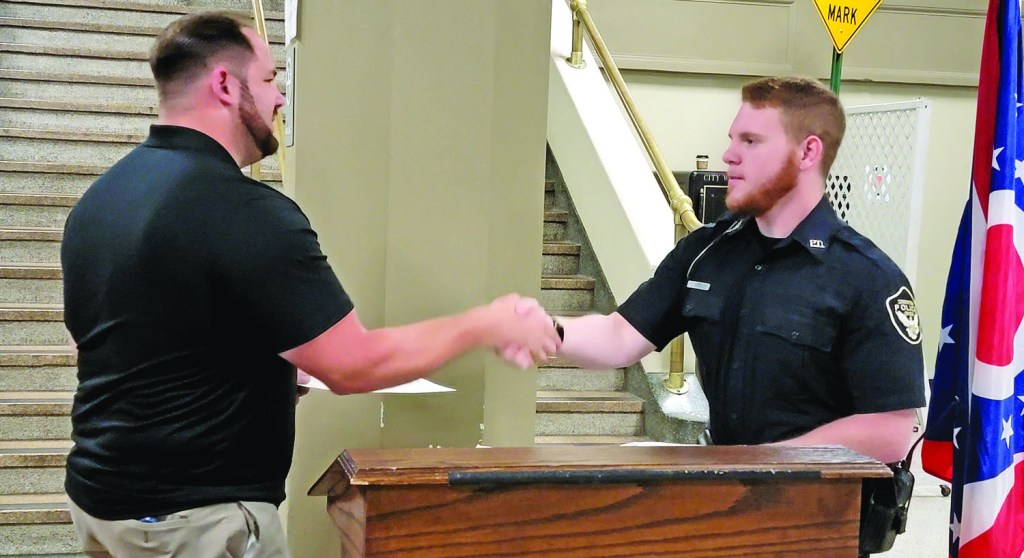 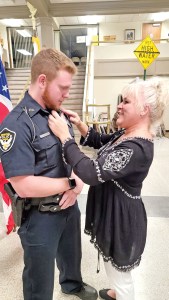 After being sworn as a patrolman with the Ironton Police Department on Thursday, Corey Allison had his badge pinned on him by his mother, Lois. (The Ironton Tribune | Mark Shaffer)

IPD gets new patrolman from academy

On Thursday, the Ironton Police Department swore in a new officer, one straight from the academy.

Across the U.S., police departments are having trouble find enough men and women to be officers and Ironton is no exception.

So what the IPD did was recruit future officers while they were still undergoing police training, which is what they did with Corey Allison, of South Point. Under the Cadet Program, he was hired on June 9 pending the completion of his final exam.

“Corey is pretty familiar to us already,” said IPD Chief Pam Wagner. “Even before he was in the academy he took the initiative to come and enroll in our ride along program. He decided this was the career path he wanted and enrolled in school.”

Allison spent the better part of a year completing his schooling and getting on the job experience by doing ride-alongs with IPD officers.

The only thing they were waiting for was the results of Allison’s final exam and Wagner said that while she hasn’t got a final score yet, his instructors said he did “extremely, extremely well on that test. We look forward to great things from Cory.”

Allison, who graduated from South Point High School in 2017, said he said he was attracted to the job because it seemed like something that would be fun and something he would rather do than more than other careers.

“I grew up watching ‘Cops’ and ‘Live PD,’ when that was still on. It looked like something I wanted to spend my life doing,” he said. While he was doing the ride-alongs he “liked what I saw and now, I’m a part of it.”

Wagner said that she hopes the Cadet Program will bring in more recruits.