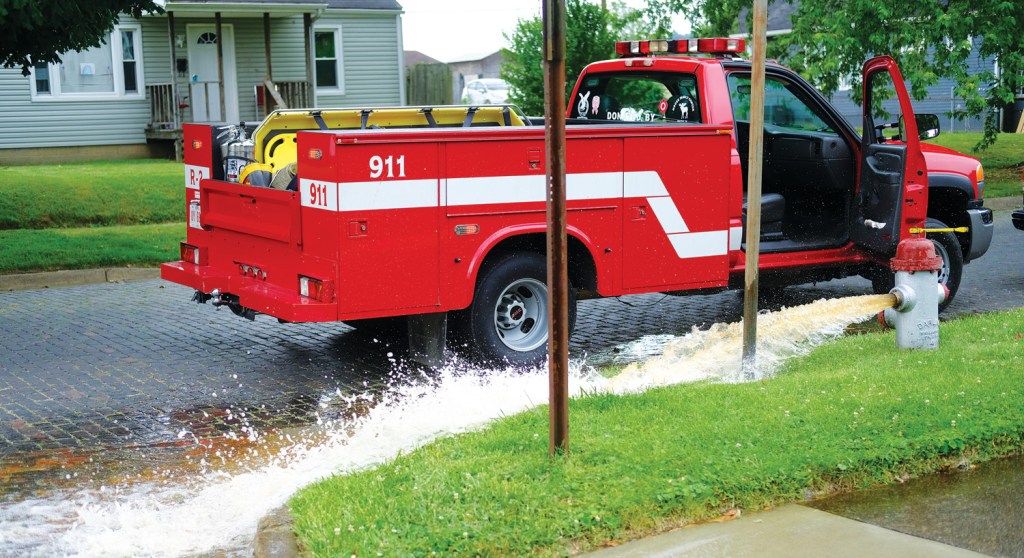 The City of Ironton will be flushing the water system around town from Monday-Friday to keep sediments out of the line and assure that the water in the system is fresh. (The Ironton Tribune | Jeremy Holtzapfel)

Will be from Monday to Friday

The Ironton Fire Department will be flushing the water systems around town by opening up fire hydrants, starting on Monday and going until Friday afternoon.

“We flush the water system for two reasons,” said Ryan Watts, the water plant superintendent. “One is to maintain water quality in the system and to keep fresh water in there. And the other reason is to do a fire hydrant function check.

That allows the fire department to know if there is any issue with flow or if any of the hydrants need repaired.”

Watts said it was similar to flushing out your home water heater once or twice a year.

“It is just to remove natural sediments that form from rust from iron pipes,” he said.

“But, where Ironton has basically 100-year-old pipes in the ground, anytime there is a hydrant opened or a water break, the people in that local area will have discolored water,” he said. “But it is just rust. The funny thing is that there is still chlorine residual in there, so the water is still safe, but it is aesthetically non-pleasing.”

The reason that the hydrant flushing schedule is released to the public is to let people know so they don’t wash white or brightly colored clothes when the water is discolored since it can lead to dingy-looking clothes. If that does happen,

Watts said people can go to the Water Department office at the City Center and they can get a free pack of a wash aid that removes the dingy look.

“It is a powder. It has all the mixing directions on the package. You just add it to the wash like you do laundry detergent,” he said.

Generally, the discolored water situation doesn’t last more than an hour, Watts said. He added the water is still safe to drink.

“I don’t think everyone will believe that statement, but it is true,” he said.

The days and the areas that hydrant flushing will be done is as follows: