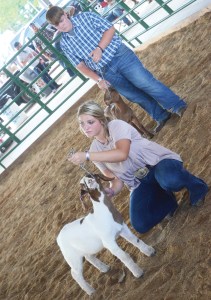 ROME TOWNSHIP — A smiling Joe Jackson was perched on a bale of hay at the entrance to the main barn of the Lawrence County Fairgrounds on Sunday, posing for photographs with his family.

It was just after the start of the Dairy Goat, Pack Goat, Pygmy Goat, & Breeding Goat Show and he had just won one of the first big trophies of the evening, as grand champion in the Pack Goat category.

A 16-year-old homeschool student, he is a member of the Clodhoppers 4-H Club.

“Pretty good,” he said of his feelings on the win, remaining humble when discussing the show. 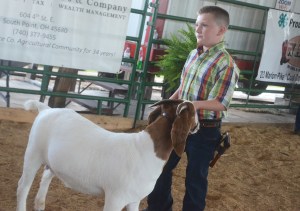 Emory Clark shows his animal to the judges. (The Ironton Tribune | Heath Harrison)

He noted how long how he had been raising goats.

“I’ve been doing this all of my life,” he said.

It was a continuing streak for him. Jackson said he took home a grand champion award at last year’s fair as well.

Sunday’s competition was the first of two nights of goat shows for the fair, with 4-H members showing their animals in multiple categories to judge Julie Morrow.

One of the youngest competitors performed exceptionally well at the show.

“I won three small trophies and one big trophy,” Emory Clark, 8, said as he and his family were setting up for photos after the show.

He’d won so many he had to think for a second to recall exactly what the wins were for — three in his class in the meat production shows and one grand champion in that category.

Clark is a member of Arabia All Stars 4-H Club and attends Symmes Valley schools.

Coming in as reserve champion in the meat production category was Gracie Daniels.

It was a repeat win as showman for Daniels, a 2022 Green High School graduate and member of Over Yonder 4-H Club, who is in her 10th year showing animals at the fair.

As was the case last year, she was competing alongside her brother, Gunner, in his seventh year showing. He repeated his win from last year and was named Junior Showman for the event. Kamryn Kerns came in second in that contest.

Senior showman was another repeat from last year, for Willow Maynard, with Gracie taking second place.

Other categories in the show included dairy goats, for which Hayden Miller was grand champion, and pygmy goats, where Kamryn Kerns won both grand and reserve champion.

Sunday marked a second day of what fair board president Randy Lambert said was a strong opening weekend for the event.

While Saturday began with heavy rains, Lambert said turnout held steady and was strong into evening, with the dryer Sunday on track to be a solid day for crowds, with tractor pulls being the big grandstand attraction for the evening.

Fair runs through weekend
The Lawrence County Fair continues through this weekend. Here are some of the events for the next few days.