Stolen forklift found on side of the road 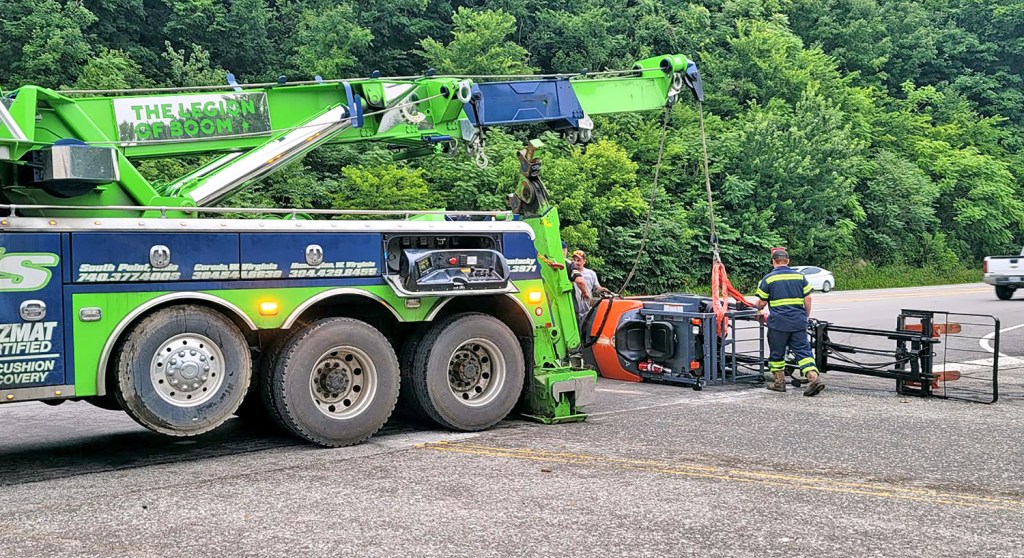 A wrecker picks up a stolen forklift off of the intersection of U.S. 52 and County Road 1 on Saturday morning. The five-ton forklift was stolen from Shield Roofing in Sheridan and apparently fell off the thieves’ truck or trailer as they turned onto the highway. The Lawrence County Sheriff’s Office is investigating the theft. (Photo Submitted | Ohio State Highway Patrol)

SOUTH POINT — Ohio State Highway Patrol troopers see a lot of things on the side of the road, but very rarely is it a forklift.

But that’s what they found on Saturday morning at the intersection of U.S. 52 and County Road 1.

OSHP Sgt. Kevin Kobi said that the patrol was called to the scene because the forklift was on the road but the investigation was turned over to the Lawrence County Sheriff’s Office after it was determined that the equipment was amongst several items stolen from Shield Roofing in Sheridan.

Kobi said that while they don’t know if the forklift was on a trailer or in the back of a truck, the thieves probably lost the forklift as they made a turn and it fell off.

“They had it strapped on with a one-inch ratchet strap,” Kobi said. “We know because we found part of the strap next to the forklift.”

He said the forklift weighs about 5 tons and is valued around $50,000.

Lawrence County Deputy Sgt. Jason Newman is investigating the case and about $100,000 worth of equipment was stolen.

He said they have a couple of good leads, but can’t release more details since it is an active investigation.

Anyone with information about the case can contact Newman at the sheriff’s office at 740-532-3525.