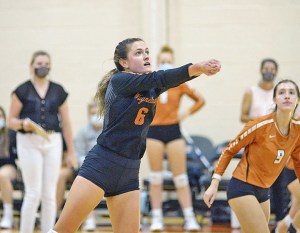 INDIANAPOLIS, Ind. – It was recently announced that 2022 graduate Alyson Johnson(Raceland, Ky. / St. Joseph Central Catholic) has been selected as a nominee for the prestigious 2022 NCAA Woman of the Year award. This award, which is in its 32nd year, has honored the academic achievements, athletics excellence, community service and leadership of outstanding female college athletes.
Over her time with the Waynesburg women’s volleyball team, Johnson developed into one of the top defensive players in the PAC and NCAA Division III. As a senior, she earned the NCAA’s statistical championship award for most digs per set.
On Oct. 2 against Grove City, her 59 digs set new Waynesburg and PAC records for digs in a match. That total was also the most digs recorded by a single player in any of the NCAA’s three divisions this fall. Following the conclusion of her senior season, which also included her eclipsing 1,000 career digs, Alyson was honored as a Second Team All-PAC selection. She was also a member of Waynesburg’s women’s tennis team and named a PAC SAAC Scholar-Athlete of the Month for September 2021.
In the classroom, Johnson has been just as successful, having been named to the PAC Academic Honor Roll three times. She recently completed her degree in Exercise Science (Pre-MS Athletic Training) and will be remaining at Waynesburg to pursue a master’s degree.
Johnson also spent over 1,700 hours giving back to her community in a variety of ways, including her time as a Bonner Scholar. She has worked with Empty Bowls, which battles hunger in a number of ways, Rainbow’s End Learning Center, which she was a site leader for, the Humane Society, Servant Song Ministries, The End Hunger Challenge, Project Linus, which provides comfort-giving blankets to children, Open Door, which provides safe, entertaining experiences for children in need, and the Greene County Historical Society. Upon graduation, Alyson received the prestigious Douglas G. and Kathryn D. Lee Servant Leadership Award.
In 2022, nearly 220,000 women are competing in college sports, and the NCAA received 577 nominations for this prestigious award. Next, conference offices will select their nominees for NCAA Woman of the Year.
Each conference nominee will be notified by the NCAA, and all conference-round nominees will be announced on ncaa.org in August.
Conference nominations are forwarded to the NCAA Woman of the Year Selection Committee, which identifies the top 10 honorees in each of the three NCAA divisions. From those 30 honorees, the selection committee then determines the three finalists in each division for a total of nine finalists. The Committee on Women’s Athletics will select the 2022 NCAA Woman of the Year from the nine finalists.
For the first time in the award’s history, the award ceremony will take place during the NCAA Convention in January, giving the Top 30 honorees a chance to celebrate their achievements alongside their families, coaches, and administrators attending the 2023 NCAA Convention.