ROME TOWNSHIP — With 77 4-H and FFA members taking part, the Market Rabbit showmanship competition at the Lawrence County Fair is one of the biggest events, surpassed in entrants only by the Market Hog event held earlier in the week.

The event, in which the youth show and talk about their animal before judge Danny Long, scores them on presentation skills. 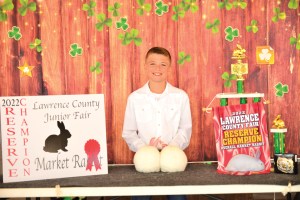 Jonah Campbell was the reserve champion in the Market Rabbits competition at the Lawrence County Fair on Monday. (Kayla Niece | For The Ironton Tribune)

It marked two days of rabbit competitions, with the animals themselves judged in Tuesday’s Market Rabbit show. 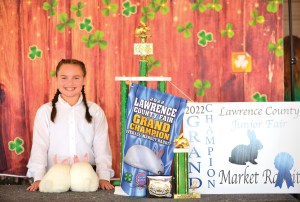 Karys Gilmore was the grand champion in the Market Rabbits competition at the Lawrence County Fair on Monday. (Kayla Niece | For The Ironton Tribune)

In that event, Karys Gilmore was named Grand Champion, with Jonah Campbell winning as reserve Champion.

“Let’s hear it for all of them,” Long said on Wednesday, after all of the junior showmanship entrants had been before him and he had narrowed it down to a table of class winners for the title. “This is a really good group.”

He said at this point, he would continue with questions and answers on the animals until he had it narrowed down to a winner.

He said confidence was key as well as the ability of the winner to “rattle off those answers.”

At nearly four hours into the event, the winner came a little later than most years, but Long said it was due to all of the 4-H members performing well and making the decision tougher.

In the end, it was Rebekah Dome, an 11-year-old homeschool student and member of Farmhands 4-H Club, who was named Junior Showman.

“I’m glad I had a lot of good competition,” Dome said after getting her trophy and banner. 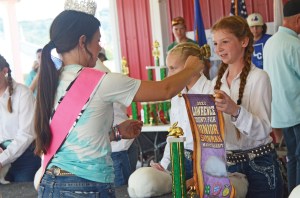 She said it was her second year raising rabbits and her first year taking part in the Market Rabbit competition.

“I learned a lot about rabbits,” she said, noting that she had gained knowledge about what goes into raising them and dealing with things such as illnesses in the animals.

She said she also wanted to thank her “awesome sister,” Kirsten.

It was the second year for the family to win the title, as Kirsten was the 2021 Junior Showman in the event.

Senior Showman, which is awarded to the older 4-Hers, went to a familiar name.

Brea Belville, who is also this year’s fair queen, earned that title for the fifth year in a row.

In that event, the Grand Champion was another repeat winner, Leah Gorby, who followed up her double win as both grand and reserve champion in the category last year. This year’s Reserve Champion was Peyton Runnels.