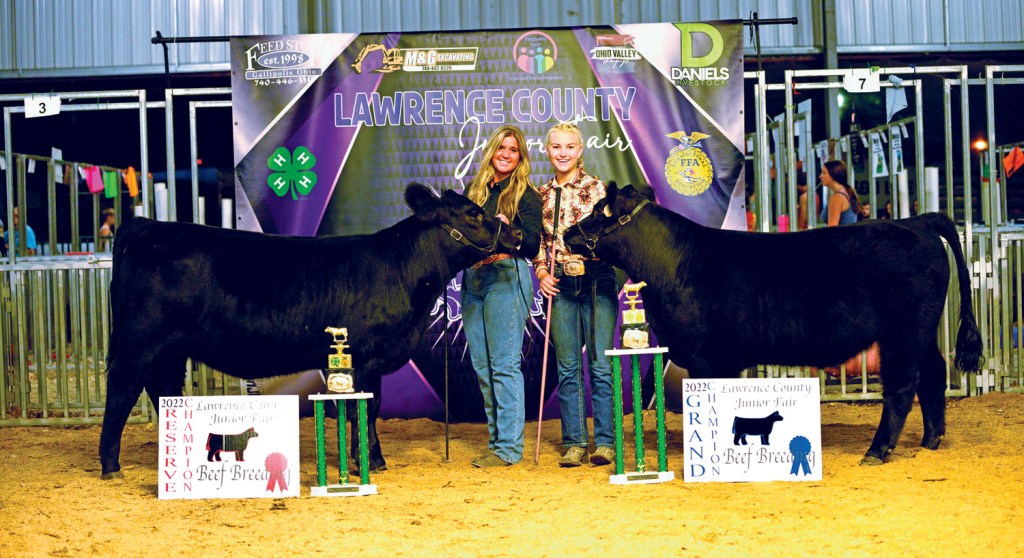 During Wednesday’s various cattle shows, 4-H girls dominated, with only one 4-H boy winning an award.

Cade, 17, with the Teen Leaders of the Junior Fair Board, has been in 4-H since she was 8 years old and was thrilled with her win.

“It is an amazing feeling,” she said, adding the cow was born on the family farm and she raised it from a calf. “I showed her last year and I placed last in my class. Came back this year and got grand in my class.”

Cade had previously won in 2019 in the breeding class. 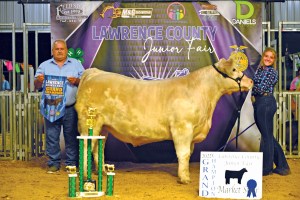 Gracie Daniels, 18, of the Over Yonder 4-H club, won Grand Champion in the Market Steer competition on Wednesday night at the Lawrence County Fair. (Kayla Niece | For The Ironton Tribune)

Leith, 17, with Power Ranchers 4-H Club, has been in 4-H for seven years. She got Reserve Champion three years ago and was excited to win again.

“It was kind of a surprise, but I am really happy about it,” she said. “My siblings had bigger cows, so I thought they were going to get it. By the time I got in the ring, they had already won their classes and I got second place, so I was really excited to win. So I am very happy.”

“I feel really great about it because I have worked very hard with this calf to get her to do my job for me so I just had to stand there and look nice,” she said. “I feel really good about my wins. My goal was just to come up here and have fun and whatever happened, happened. But we came up with wins, so I couldn’t ask for a better outcome.”

“I am really excited. My head could pop off,” she said.

She said she didn’t really expect to win.

“I expected to get third or last,” Lambert said.

She said she was pretty surprised to win Grand Champion, especially since this was her first time competing.

“I wasn’t expecting it,” she said. “I was hoping to place. I’m really happy.”

Moore, 15, is in the Starlight 4-H club and has been a member for six years.

“I am very excited,” she said. “I was just glad to win Reserve and it was a really good competition with all the other competitors.”

In the market steer competition, Gracie Daniels, 18, was crying after winning Grand Champion, although they were tears of happiness.

“It’s because steers are so much work and it is great that it paid off,” she said. “I am so happy.” 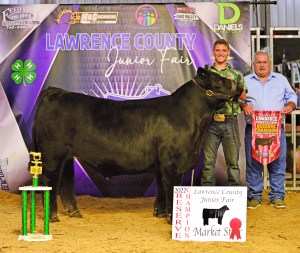 A member of the Over Yonder 4-H club, this was Daniel’s last year of competing after 10 years.

“I am happy to go out with a win,” Daniels said.

Evan Clark, 17, of Getaway Go-Getters 4-H Club, was the only boy to win in the various cattle competitions on Wednesday night when he won Reserve Champion in the Market Steer category.

It was his first win ever.

“This is my first Reserve or Grand Champion win ever,” he said. “I am ecstatic about winning, I won one for the boys.”

He said he did not expect to place as high as he did.

“I have a good calf, but I did not expect him to get reserve champion. But when we came out here, I thought that he had a chance,” Clark said. “And his knee was buckling in, that gave him a lot of trouble. But he still did amazing. I am very proud of the calf and I can’t believe we won.”

Payne, 15, of Starlight 4-H Club, has been a member for seven years.

This was her first win.

“I feel good about it,” she said. “I beat my sisters, that’s what I care about.”

Fout, 10, also of the Starlight 4-H Club, is in her second year. Last year, she won Grand Champion with the same calf in the Market class.

“I was really nervous about my little calf, but this one I’ve shown before and he’s a really good cow,” she said. “I’m pretty happy to win.”