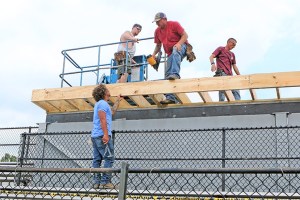 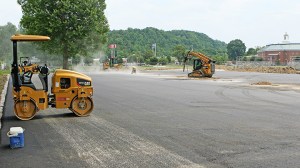 Just call it a makeover or facelift for athletic facilities.
The government has allotted all schools COVID-19 money in different phases to b distributed over a three-year period. The money is to be used for necessary repairs, replacement or upgrades of facilities.
Ironton High School is using its money for some much-needed repairs to the tennis courts, stadium and press box. The project is currently in high gear and athletic director Trevon Pendleton talked about what the vision was for the facilities.
The press box has been in need of a facelift for more than a decade. Due to a lot of government restrictions to what could be done to the existing structure, Ironton was limited as to what it wanted to do and what it has been allowed.
“We’re widening it a total of about five feet. Inside it’s going to allow us to stagger so we’re actually going to have two levels of indoor seating,” said Pendleton.
“And then we’re going to have a third level that will be the crow’s nest area with a cover over it.”
The press box was on what are called stilts which caused it to be classified as a two-story building. If Ironton went beyond certain limitations, the state would have require such expensive items as an elevator and sprinkler system.
“They went in and reinforced the existing foundation and (the press box) is sitting on that instead of the stilts,” said Pendleton. “Obviously, it was in need and eventually we was going to have to do something a little different. The bigger, oversized windows are going to be ideal.
“I was wanting to do it a little bigger and a little different, but we utilizing some COVID money and so we were restricted on what we could do. We had to use the existing foundation and things of that nature which limited us on what we could do size-wise,. But it’s going to be pretty nice.”
Looming in the near future will be the necessary replacement of the artificial turf on the football field itself. Pendleton said that preparations are being made to meet that issue when the time arrives.
“We’re not to the full fund of it, but the majority it. We’ve got some things working that hopefully by the time in the next two years we’ll be at the full fund of turf replacement,” he said.
As for the stadium, there were some renovations made last year and will continue in the future.
“We have made some improvements. We have (air conditioning) in the locker rooms, and we’ve got hearing and cooling underneath, we put in an all-new floor throughout the locker room and the back of the home locker room is completely renovated. We did that last year,” said Pendleton.
“Phase two will happen next year with the new showers and a little bit of bathroom expansion. That’s all we’ve done to the stadium so far, but there’s a few other things we want to do. In phase two we’re going to be re-doing the stadium bathrooms for spectators.”
The tennis courts were budgeted for $300,000 for the tennis courts and another $150,000 for the press box but both are expected to come in under the $450,000 total.
Contractors for the tennis courts is Akers Paving while Mullins’ Construction is handling the press box.
The new tennis courts have cut into the small youth park that has been seldom used. Most of the rides weren’t even functional but Pendleton said the board is looking at options. However, as of now there won’t be a park area but he said there are plans to expand the area and create community involvement activities.
“We’re looking into the possibility of an exercise park with a little walking trail. But as far as a set plan, there is not one currently,” said Pendleton. “Our main focus is to get some playable tennis courts and a nice surface so that people in the community can play tennis there.”
Pendleton said everything is on tack to be completed by the first home football game which isn’t until week four when Ironton will host its football classic with three games on Saturday, Sept. 10.