Emo Prom Night is Saturday at the Ro-Na

If you danced to My Chemical Romance or Fall Out Boy, spent a lot of time on Myspace to stay in contact with your favorite bands or spent hours curating the perfect CD or iPod playlist of Emo bands, there is an event for you this weekend called “Til Death Do Us Part – An Emo Prom Night.”

It is being put on at the historic Ro-Na theater in downtown Ironton on Saturday night by Charlies Wilds, the vocalist for the band Revision, Revised and creator of the annual Grovefest metal music festival. 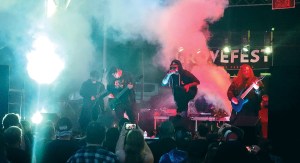 Revision, Revised, seen here in concert at the 2021 Grovefest, will be among three bands playing Emo hits during the “Til Death Do Us Part — An Emo Prom Night” on Saturday at the Ro-Na in Ironton. (The Ironton Tribune | Mark Shaffer)

He said he had seen that there were a lot of Emo dance nights but those were just dancing as a DJ spins early 2000-era songs.

“I went to one of them. They played all the stuff from the era, so it was nostalgic… but it was just a dance party with a DJ,” Wilds said. “I thought, ‘I can do something cooler than that.’”

He wanted cooler and bigger. He wanted the prom that he wanted to go to.

“I thought let’s make it a prom… some people never went and I have all the decorations from my wedding,” Wilds said.

So he rented the Ro-Na, bought a ton of posters and hired two other bands as well as his band, Revision, Revised, to play the hits of MCR, The Used, Linkin Park, Paramore, Three Days Grace, AFI, Evanescence and others.

His wedding decorations were black and white, but it was easy to convert it into something more Emo.

“We just dyed it or painted it so it is all black and red,” Wilds said. “And we got almost a $1,000 worth of posters and décor from that time that will be in the main lobby. And then in the main area will be the prom. Wise Guys will be selling food and there will be a bar with themed drinks.”

There will still be a DJ, who will play in between sets by Revision, Revised; Part, of Huntington, West Virginia; and Majesties, of Grayson, Kentucky. The first band starts at 7 p.m.

“We are each playing for 40 minutes each and then DJ, then the next band and the DJ and the last band and then the DJ will end the night,” Wilds said. “It will be non-stop once the doors open.”

The sound equipment and the lighting rig will be the ones used at Grovefest last year.

And Wilds said while prom gear isn’t required, it is encouraged.

“I know a lot of the girls that bought prom tickets are wearing their black dresses,” he said. “But it can be anything. It is based around the Myspace era, because that’s when Emo was so prominent.”

For more information on the event, go to www.emopromohio.com.