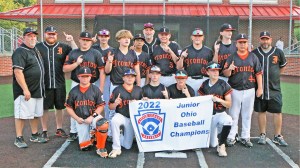 PEDRO — Dawson Philyaw turned a one into a two.

Philyaw pithed a one-hitter as he led the Ironton Junior League All-Stars to their second straight state championship with a 12-1 rout of Cuyahoga Falls in five innings on Wednesday.

Philyaw struck out seven and walked one in going the distance. The only run was unearned and the lone hit was a two-out single in the second inning.

Ironton will now play in the regional tournament Aug. 6-12 in Midland, Michigan.

The Ironton All-Stars collected 10 hits with Tyson Harvey going 2-2 with two runs batted in and Nate Sloan was 2-2 with an RBI to pace the offense.

Ironton baserunners stole 12 bases with Sloan stealing 3 bases, Beckham Waginger, Harvey and Mullins swiping 2 each and Baker, Kerns and Carter Bridges one each.

After retiring Cuyahoga in order to start the game, Ironton erupted for eight runs in the bottom of the inning.

Harvey led off with a base hit, Mullins walked and the pair pulled off a double steal. Harvey then scored on a wild pitch.

Jacob Hughes walked to force in a run and Harvey and Mullins followed with RBI singles.

Ironton followed that with two runs in the second.

Bridges singled, stole second and scored on a double by Akers. Kerns then singled home the second run and it was 10-0.

Cuyahoga scored an unearned run in the top of the third but Ironton got two runs in the bottom of the inning to run rule with a 12-1 lead.

Ironton rolled through the tournament, outscoring their opponents 77-8.

In the district, Ironton beat Rock Hill 12-0 and 12-0 to win the District 11 title and earn the state berth.

Barnes goes his own way as he heads to Marshall