Panthers’ Mount likes the odds of playing at Otterbein 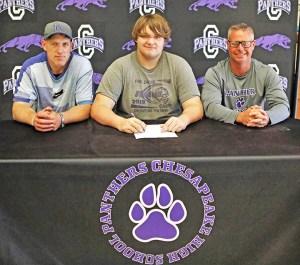 CHESAPEAKE — As far as Bryce Mount is concerned, Otterbein University has one of the best winning percentages in the country.
That’s winning percentage in terms of academics. But the football is good, too.
The 6-foot-5, 305-pound Mount will experience both the athletics and academic programs after signing a letter-of-intent Thursday to play for the Cardinals who are an NCAA Division 3 school and a member of the Ohio Athletic Conference. 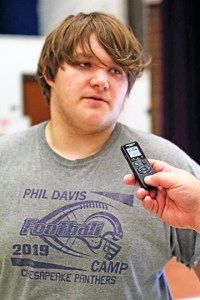 “I looked at the school and they had a really good job placement. You have a 98 percent chance of getting a job right out of college,” said Mount who received scholarship money that pays for most of his college expenses.
“Once I get my degree, it won’t take long to get a job. Plus, they have a really good teaching cirriculum.”
Panthers’ coach Todd Knipp is excited about Mount’s college choice because Otterbein combines outstanding academics with athletics.
“Bryce is a good player. He did a good job this year getting his weight down. He’s got a good frame and he’s going to have a good opportunity to play,” said Knipp.
“I know the staff pretty well at Otterbein and I think he’s going to fit in really well.”
Otterbein is planning to play the human Mt. Everest at offensive tackle which was his main position with the Panthers and where he was a four-year starter and earned first team all-district honors and honorable mention All-Ohio.
Playing college football will just be a way for Mount to continue a life-long love affair with the sport.
“I like the contact. I like hitting people. I think I started off playing as early as I could. I played at Coal Grove on the C-team and then I moved to Tennessee and I played there and then I moved back up here and I’ve been playing since fifth grade and I’ve loved it ever since,” said Mount.
In the past, Mount has focused all his time and attention athletically to football. However, this past season he also wrestled but it was part of his football plan.
“I wrestled this year to help keep down the weight,” said Mount. “At the end of football season I was about 330 and by the end of the season I got down to where I could actually wrestle in meets. I got down to about 285, 290. I think conditioning on and off all year helped get me ready for football because I leave next Sunday.”
Mount said he has set two goals: get a good education and play as early as possible.
“They win, but I’m just going to see what happens. I’m going to work hard and if I get playing time I get playing time. It’s up to the coach. I just have to show the coach what I’ve got,” said Mount.
“I just want to do well in school, work my way up take depth chart and get some playing time. I know I’m a freshman, but I can get some playing time this year.”
Mount plans to major in history and obtain a teaching certification.
Besides teaching, Mount was asked about coaching and he grinned.
“Maybe a little bit,” he said.