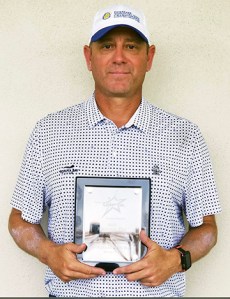 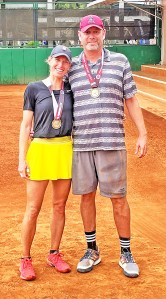 BONITA SPRINGS, FL. — Adam Lane is like a fine wine. He just gets better with age.
The former Ironton Fighting Tigers’ tennis standout has had an outstanding career not only in high school but college and beyond.
And now the 1991 Ironton graduate has the hardware to prove his continued success.
Lane is currently the Director of Instruction for the Bonita Bay Club which is ranked as the No. 8 private tennis club in America. Working as the club pro and still active playing doubles recently earned him the respect of his peers when he was named the Southwest Florida Pro Coach of the Year.
The award is presented by the Florida Division of the United States Professional Tennis Association and is based on coaching, community service and playing ability among other factors.
“My award for Coach of the Year is nominated by fellow pros in the industry, that is why it is an honor for me,” said Lane.
Lane and his wife, Alison, are fresh off a tournament championship in Ecuador this past week for mixed doubles in the 35-and-over age division. Not only did Lane and his wife get the win, the current tennis rankings were announced and they are No. 26 in the world in the mixed doubles for ages 45-and-over.
“I still participate in tennis frequently. I am the captain of one of our local pro league teams,” said Lane who also serves as the district president.
Lane has been limited to just teaching in Florida. He has also been an instructor in Korea, China, Australia, Costa Rica and Puerto Rico.
At the Bonita Bay Club, Lane is currently the Director of Instruction. He also works with younger tennis coaches in both tennis and pickleball.
Other duties include developing skills both on an off the court and setting the philosophy and direction of the instruction both on and off the court.
Before his coaching and professional career, Lane reached the regional finals in high school and went on to play at Belmont University where he was a four-time all-conference player in both singles and doubles.
He began full-time coaching when he turned 30-years-old. He has been a college coach, for public parks, high-end resorts and exclusive country clubs.
Tennis has become a family affair for Lane. Besides playing doubles with his wife, his bother Alan Lane is a tennis coach in Australia and his brother-in-law Chris Moulin is also a full-time coach in Finland.