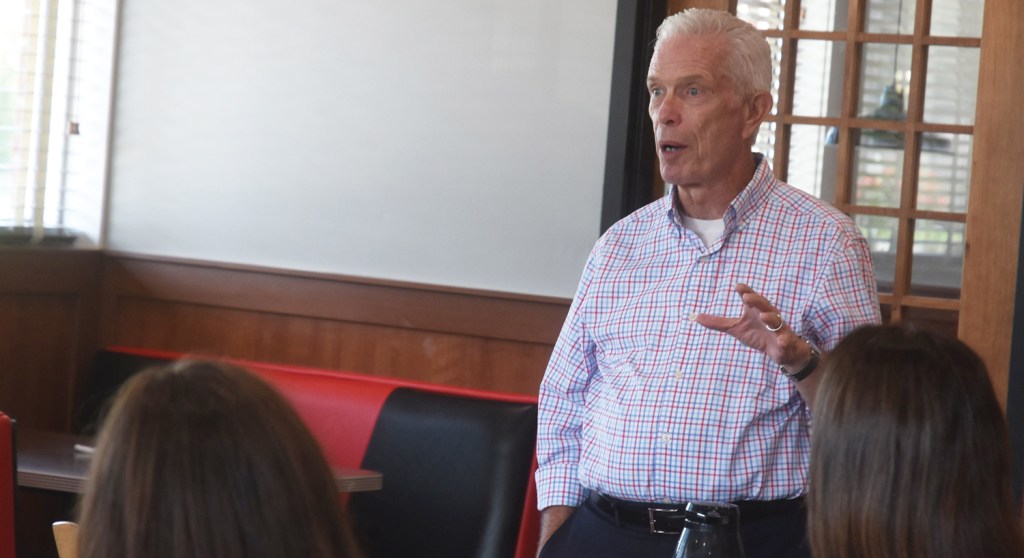 The National Federation of Independent Business hosted a luncheon for local small business owners at Frisch’s Big Boy in Ironton on Wednesday and U.S. Rep. Bill Johnson, R-Ohio, served as keynote speaker for the event.

Johnson represents the state’s 6th Congressional District, which includes Lawrence County until January, at which point the county will move into the 2nd District, currently represented by Republican Brad Wenstrup. Johnson, who lives in Marietta, has served as the county’s congressman since taking office in 2011.

NFIB, founded in 1943, advocates on behalf of small and independent business owners, in Washington, D.C. and in all 50 state capitals.

Roger Geiger, vice president and executive director of NFIB for Ohio, said the group has 21,000 members across the state.

He told the attendees at the event that they were invited because they are among the most active members of the group.

He said research has shown that small business owners are one of the “most respected entities when talking to the public about politics.”

“They’re seen as credible than the clergy,” he said. “I’m not suggesting you tell people how to vote, but to tell them how you’re going to vote.”

He said the sphere of influence they have could be the margin in races.

Geiger said NFIB opposed the Build Back Better agenda of President Joe Biden “in any version” and supports a change in control of Congress, which currently has Democratic majorities in each chamber.

He said they also wanted to bring attention to the Ohio Supreme Court, which currently has a one-seat majority in favor of Republicans and three seats on the ballot this year.

“The loss of any one of these seats would move it from a conservative majority,” he said, stating the court deals with tax policy, unemployment, tort matters, workers compensation and private property rights in the business that comes before it.

Geiger introduced Johnson, who he said he met shortly after he was elected to Congress, as “the real deal” and said he had a strong record on NFIB’s issues.

He has a tremendous background in the business world,” Geiger said.

Johnson opened with a critique of the Biden administration, claiming that “bad policies” on the border, taxes and other matters had led to inflation and economic uncertainty.

He said while job creation numbers had been good in the most recent report, “we are still 1.5 million workers short of where we were pre-pandemic.”

“We’ve got to turn this around,” Johnson said. “We have to stop these egregious policies and put a check on this administration.”

Johnson, like most officials in Ohio, supported the legislation, especially with Intel set to build four manufacturing plants in Ohio.

He said it was “a supply chain issue” and would help to make the U.S. independent and not have to rely on China and Taiwan for chips needed for technology, ranging from the military to space exploration to the energy industry.

“If we lose our advantage, we would be totally dependent on the worst in the world to provide us with microchips,” Johnson said he told colleagues in an effort to get the bill passed.

Johnson noted that only 24 Republicans in the House voted for the legislation, but that number included all eight from Ohio, including himself.

“It was the right thing to do,” he said.

Though he said the legislation was costly, the need outweighed that in consideration.

Johnson pledged to work with NFIB and advocate for issues they support.

“I’m on your side and will continue to fight for small business,” he said.