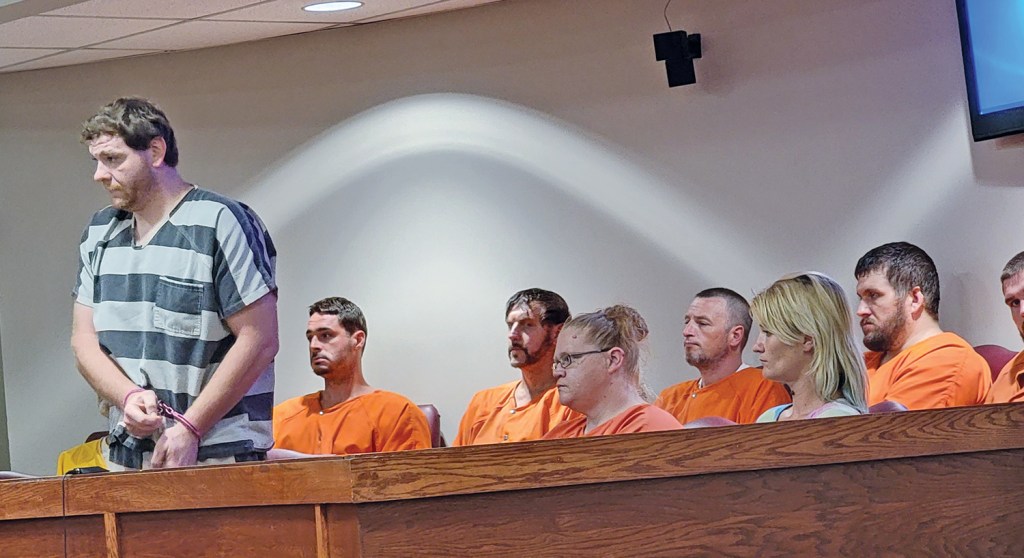 Bradley Spoljaric, 29, an IPD officer since April 2020, was in the Ironton Municipal Court on Thursday morning for a hearing regarding his drug and domestic violence charges. His request for a lowered bond or to be released on his own recognizance was turned down. He has another hearing on Monday morning. (The Ironton Tribune | Mark Shaffer)

A preliminary hearings is set for Monday

An Ironton Police Department officer arrested last week on several charges was in Ironton Municipal Court on Thursday morning and was denied bond.

Bradley Spoljaric, 29, an IPD officer since April 2020 and a sergeant since July 2021, was arrested on July 27 and charged with first-degree misdemeanor domestic violence, second-degree felony possession/trafficking in Schedule 1 and Schedule 2 dugs and third-degree felony tampering with evidence.

Judge Kevin Waldo began the hearing by asking Spoljaric if he wanted the court to appoint an attorney for him.

Spoljaric asked if prosecutor Phillip Heald would be open to reducing the bond instead so he could hire an attorney and asked to be released on his own recognizance. He said he was not a flight risk and would be willing to wear an electronic monitor.

He also added that he would be willing to plead on the domestic violence charge to take that off the table.

Waldo started with whether Spoljaric wanted to be considered indigent so an attorney could be appointed. Spoljaric said yes, because he couldn’t afford one as long as he was in jail.

Waldo appointed an attorney since all the charges carry possible jail time.

“Due to the circumstances of your recent incarceration and you do not have enough money to get out on bond and also that you apparently are indigent and don’t have the money to hire an attorney, I think it would be a benefit to have an attorney appointed,” Waldo said.

Waldo then returned to the misdemeanor domestic violence charge.

“I am not going to accept a plea at this point and time due to the fact I just appointed (an attorney) and I would like you to discuss the issues of your plea, or not entering a plea, with an attorney before you make that effort,” Waldo said.

Spoljaric went back to the issue of bond, assuring the judge that his showing up in court would not be an issue.

Heald said that, sitting in his chair, it was not unusual for people to say exactly the same thing.

“A lot of them mean it and go through with it,” he said. “But the decisions about that will be made in common pleas court. And so, this case needs to get to common pleas court and it is our intention today was to have a preliminary hearing and have the case then bound over to the grand jury. And then he would be able to address that to the common pleas court quickly.”

Waldo kept the bond as it was and set another hearing for Monday.

Spoljaric asked if the protective order by his wife could be dropped.

Heald said he preferred that she be at the hearing on Monday to tell the court, on the record, what she wanted done.

Spoljaric said it was honestly a relief that he was arrested because it ended six months that had been a nightmare.

“That wasn’t me,” Spoljaric said.

“Which one wasn’t you?” Waldo asked.

For “the last six months” he hadn’t been himself, Spoljaric told the judge.

Spoljaric was in the gray-striped jail uniform of the Scioto County Jail where he has been held since his arrest last week. He is being held there because the Lawrence County Jail had no way to segregate him from other inmates he might have had contact with before.

The investigation is ongoing and information is being forwarded to the Lawrence County Prosecutor’s Office. Anyone with information about this case can call the IPD at 740-532-5606. Information can be left anonymously.