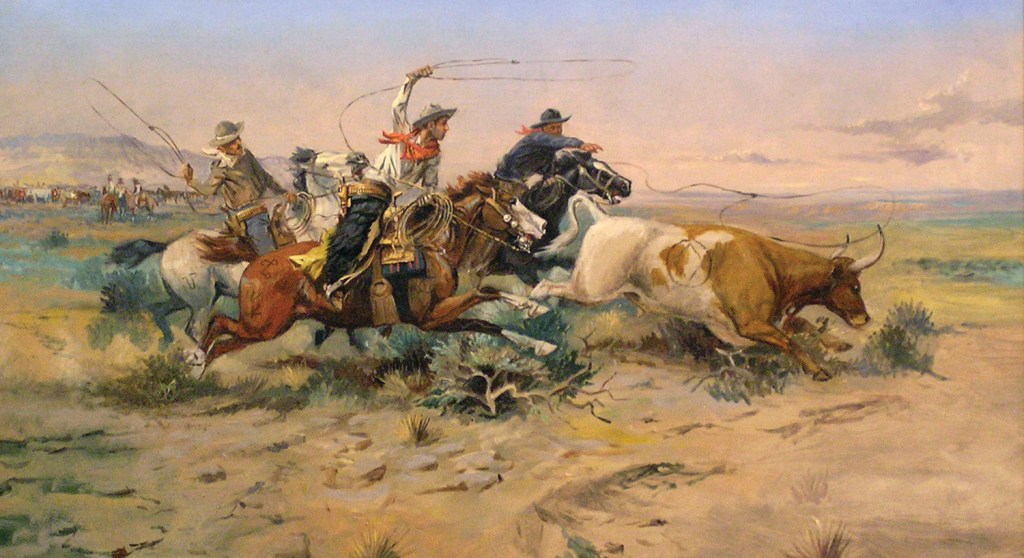 “The Herd Quitter,” by C. M. Russell. The American cattle industry has its roots in the Spanish conquest of Mexico and the Texas reolution. (Public domain)

EDITOR’S NOTE: This is the first in a two-part series. Look for the other installment next weekend.

In 1519, Hernando Cortes, a Spanish conqueror, sailed to Mexico to conquer the Aztec Empire.

He had 508 soldiers to conquer 11 million natives. Aztec priests had prophesied the return of Quetzalcoatl, their great blonde god. With the help of his Aztec mistress, Cortes had defeated them by 1522. Cortes enslaved the Aztecs and branded them on their faces (cheeks) with the letter G for “guerra,” Spanish for war. He sold some of the Aztecs to future Spanish ranchers.

Thus, America’s first cowboys, natives in various areas of the New World, wore a brand before any cattle were branded. 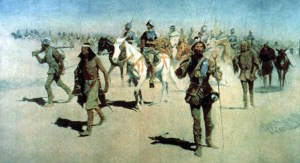 “Coronado Sets Out to the North,” by Frederic Remington. The Spanish conquistador brought Spanish cattle on his trip to what is now Texas, which evolved into the longhorns of today. (Public domain)

Christopher Columbus was the first person to bring cattle to the modern New World. He brought them to the Island of Santo Domingo in 1493.

In 1540, Francisco Coronado left Mexico searching for the golden cities of Cibola. He brought some Spanish cattle. These cattle were Andalusian cattle, or black cattle, which were used in European bull fights. They were brought north to Texas and would evolve over time into the Texas longhorns.

From these hardy Andalusian cattle would come a need for longhorns, mustangs and men called cowboys. Cortes had introduced the horse to the New World in the very early 1500s. The Spanish would establish missions, mainly in Texas and California. At these missions, large herds of cattle were raised.
Mission ranches in Texas centered around a place called San Antonio. There was no proper, effective fencing in Texas so the cattle there ran wild and evolved into the Texas longhorns.

They would be called longhorns because of the distance between the tips of their horns — in some instances, an eight-foot width! These missions in California flourished and amassed thousands of cattle. An industry would develop.

So the first American cowboy was an Indian. This mounted herdsman was called a vaquero (from “vaca,” meaning “cow”). These mounted Natives were taught how to handle cattle by the Spanish ranchers and mission priests, but on foot at first.

The vaquero wore a kerchief around his head. Very important was a wide-brimmed, low crowned hat. His pants were knee length, buttoned on the side. He carried a long knife (to take down the cattle) in a scabbard inside his garter on his right leg. He had a rawhide lariat which was wrapped around his saddle horn. Large pieces of cowhide would be used to protect his legs when he had to chase cattle through brush and thorns where they hid.

The vaqueros main weapon and tool was the rawhide lariat, sometimes 110 feet long. These vaqueros set the philosophy for herding cattle, standardized the necessary equipment and enveloped much of the cowboy vocabulary. It would be 50 years before the “American Golden Age of Our Cowboy Era.”

The Indian herdsmen were learning a new trinity, beef, hides and tallow. As the Americans in Texas emulated the Indian vaqueros, they called themselves “buckaroos.” A problem of the mission priests was prohibiting the Natives from eating horsemeat. There was no strong desire as yet to include beef as a food necessity.

Every seven days at the mission ranches, a roundup was held and the priests tried to give the Natives beef as food for one week. Bones and skulls from the slaughtered cattle would be used to make corral fences since there was a lack of wood.

The Indian herdsmen at the missions lived a life of work, prayer and punishments for laziness or trying to run away. The Indian herdsmen were virtually slaves. The priests’ favorite punishment was to give their cattlehands 12-15 lashes on their bare buttocks with a whip.

The priests made other Natives do the whipping. The Natives would eventually be free and would slaughter thousands of cattle to express their contempt.

After the Texan War for Independence (1836) and the Mexican War (1848), men drove Texas cattle to the California gold fields to feed the miners. For the first time in American history, English-speaking men took chances driving Texas cattle to a market. When Mexican ranchers fled south of the Rio Grande River, their branded cattle were left behind after defeat in the Mexican War. The ex-soldiers of Sam Houston gathered these cattle and put them in pens.

Due to the war, range operation and supervision in Texas were neglected. Most able-bodied Texas men went to fight for the Confederacy. The Texas cattle would multiply and become very wild, but there was no one to handle them.

By the summer of 1865, there were 6 million longhorns roaming wild and free in southwest Texas. Southern soldiers who survived the war came back to Texas “broke” and their Confederate money was worthless.

The 6 million longhorns represented more beef than all of Texas could eat. Northern markets were a long distance away. Who could control the cattle?

Texas longhorns could be bought in Texas for $4 a head, but could be sold for $40 in the north. Most of the 6 million longhorns had no brand. Texans called them “mavericks.” An early Texas rancher, Samuel Maverick, did not brand all of his cattle and his neighbors called the unbranded ones “mavericks.”

Texas men and boys returning from Confederate armies became cowboys. Many wore their Confederate uniforms, kepis and boots because they had nothing else. They searched the thickets and gullies to “make the gather.” Many different herds were thrown together until 2,000-3,000 longhorns were driven to northern markets.

Most of these first American cowboys preferred to drive four-year-old steers which were better “walkers.” Market goals were to Missouri and eastern Kansas.

Charlie Goodnight passed on some valuable hints to those driving the herds north. He watched swallows. If they had mud in their beaks for nestbuilding, a water hole lay in the direction from which they flew.

To stop thirst, he advised sucking on a bullet. To stop hunger and stomach growling, chew tobacco. To judge the freshness of a hoofprint, count the insect tracks across the hoofprint.

A single cow needed 10 acres of grass to graze in a year if the soil was good. A single cow might drink 30 gallons of water a day. Charlie figured after the Civil War there were two or three mavericks for every one branded calf. Charlie was one of 36 cattle barons in 1885 who controlled 20 million acres of United States soil.

The model of a cattle town was Abilene, in northeastern Kansas. Other cattle towns were Newton, Ellsworth, Wichita, Caldwell and Dodge City.

From 1867-1872, more than a million cows came through Abilene. Abilene was the brainchild of an ascetic-looking, but rich, Illinois native, Joseph Geitling McCoy. He selected Kansas to be a market for Texas longhorns. McCoy was “stuck” in a village called Abilene when the train he was on stopped to repair a bridge. He was told Abilene meant “city of the plains.” The village was small, dead and possessed only 12 log huts on 450 acres. One man owned all 450 acres!

Mrs. Tim Hersey opened her Bible one day to the Book of Luke and read Chapter 3, Verse 1 about a ruler in a place called Abilene in the province of Judea. Thus, she christened the village Abilene, Kansas. McCoy traveled on to Salina, Kansas, but the people there were not interested in Texans bringing cattle there. It seemed Abilene was the only suitable location to become the first cattle town in the West.

Abilene lay west of Kansas farmers, was on the route of the Union Pacific Railroad and had abundant grass and water. However, Abilene had no cattle pens, ramps, railroad station or facilities for many cowboys. The Union Pacific Railroad would charge $5 a carload to transport longhorns.
McCoy bought 250 acres of land at $5 an acre. His dream was about to become true.

In two months, McCoy changed Abilene. He had pens built to contain 3,000 stomping longhorns. He had a 10-ton scale built to weigh 20 cows at once. He also added a livery stable and an 80-room hotel called the Drovers’ Cottage.

Cowboys did not particularly like loading the longhorns in the railroad cars. It took the cowboys two hours to load a train of 40 cars with Texas longhorns. The cowboys had to punch the longhorns with poles to get them to go up a ramp into the cars. From this cumbersome task, the term “cowpoke” originated.

In two years, the log cabin village of Abilene had become America’s national marketplace. These longhorns coming to Abilene walked the Chisholm Trail to get there. With any good luck, it took three months to come to Abilene from southwestern Texas. It is estimated that the Texas longhorns averaged almost one mile per hour.

The Chisholm Trail was named after a Scotch-Cherokee trader, Jesse Chisholm, who had carved out part of the route as a straight, level wagon road. The trail had opened as a cattle trail in 1867. By 1872 more than a million head of cattle had gone up the trail. With so many cattle moving on the trail, it expanded to a width of 200 to 400 yards. Grateful people in Abilene said, “Joe G. was the Real McCoy.”

Due to murders, prostitution, gambling, vandalism and other offensive actions, farmers and citizens of Dickinson County, Kansas, published a request for Texas cattle herds to not come to Abilene, but seek another site for cattle shipment.
In 1872, Texas cattlemen headed for Ellsworth and Wichita, Kansas. Abilene’s cattle shipping days were over. The newspaper reported, “Business is not as brisk as it used to be during the cattle season, but the citizens of Abilene have the satisfaction of knowing that ‘hell is more than 60 miles away.’”