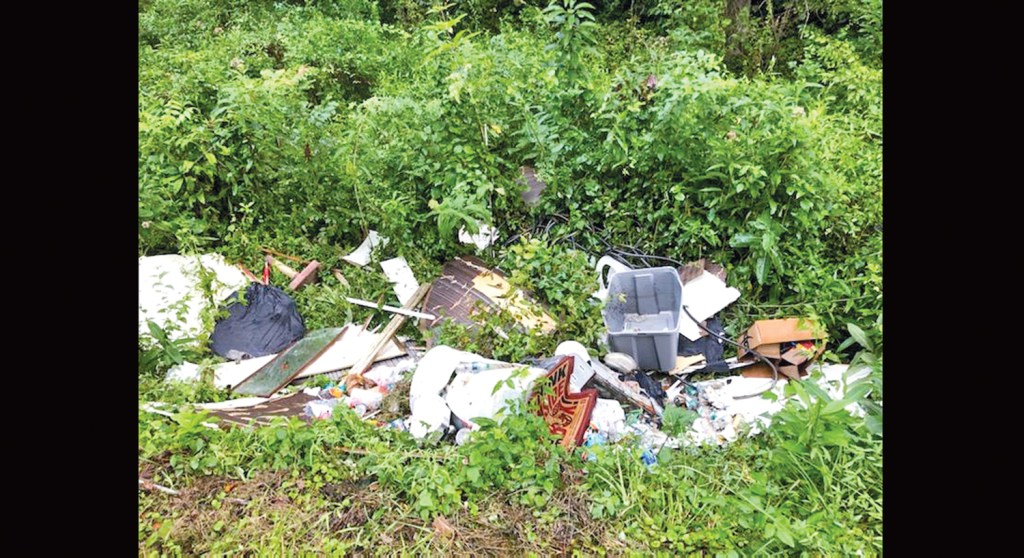 Recently, some people have found out that the people they hired to haul off their trash ended up dumping on the side of the road. They didn’t find it out until they got a visit from the Lawrence-Scioto Solid Waste District’s enforcement officer. Without proof that they hired someone to take their trash away, the person is liable for the clean up and could face fines and jail time. (Submitted Photo)

When it could end up with you facing jail time and fines because of the person you hired to do a job for you.

That’s why Seth Summers, the enforcement officer for the Lawrence-Scioto Solid Waste District, is warning people about using the services of people on Facebook Marketplace offering to haul off your trash at a low price.

Part of Summers’ job is dealing with trash dumped on the side of the road. Generally, that means someone decided that was a better place to put it rather than pay for fees at a landfill. Summers goes through the trash and if he finds a name and address, he will track the person down and then they could end up in court for illegal dumping.

Anyone who’s stuff is found at a dump site could face up to $25,000 in fines and possible jail time of 2-4 years if they don’t have proof they hired someone to haul their stuff away.

But a couple recent illegal dump sites have revealed names, but not necessarily the name of the person or persons dumping the trash.

When Summers tracked the people down, he found the common thread is that they had hired someone from Facebook Marketplace and paid them cash to haul their trash away.

“If I track it back to them and they have no proof of who they hired or that money was exchanged, they can be liable,” Summers said. “They didn’t get receipts, they didn’t get any information from these people, that leaves them responsible.”

In one case, a woman had rehabbed her bathroom and hired a couple of guys off Facebook Marketplace to dispose of waste the rehab had generated. She expected it to end up at the landfill, it ended being found at Lawrence Street-Porter Gap Road.

“There was a large amount of bathroom wall paneling, a toilet, household trash, there were letters with birthdates, Social Security numbers, addresses,” Summers said.

After he tracked the woman down, she admitted that it was hers and was very concerned that information about her family was just left for anyone to find. It turned out she had paid a couple of teen boys to haul the stuff away for $100.

She was able to get the names of the boys and Summers found them and made them clean up what they had dumped and then bring back paperwork verifying that they had disposed of it properly.
In another case, the people aren’t so lucky.

“Two weeks ago, I had a dump site with a lot of mattresses. There were boxes all to the same person at the same address,” Summers said.

The deal was the same, a person they didn’t know was hired off of Facebook Marketplace.

He said that the best way is to hire a reputable firm to haul stuff off.

“There are people who can deliver dumpsters to your house and then take it away,” Summers said. “There is also Rumpke transfer station and Portsmouth transfer station where they can take their stuff and get receipts.”