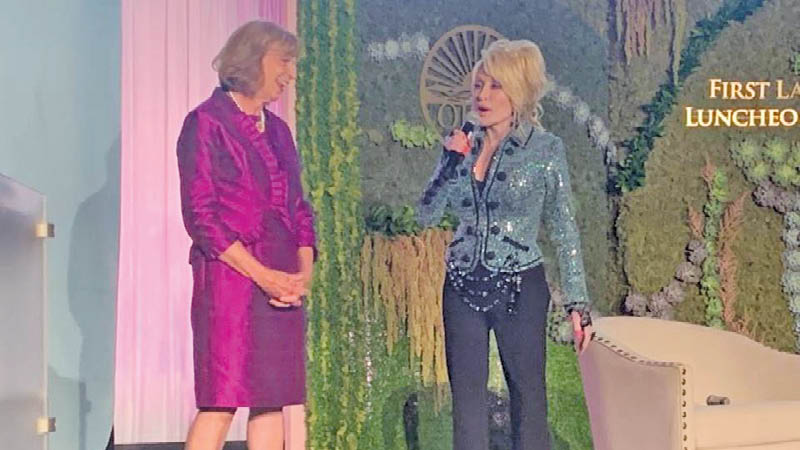 Country music superstar Dolly Parton greets the audience during a private luncheon at the Ohio Union on Tuesday. The event, held by Ohio First Lady Fran DeWine (left) and her charitable foundation, celebrated the success of Parton’s Imagination Library in Ohio, which DeWine said now sends free books to 48 percent of all Ohio children under the age of five. “The DeWines -- I love that name, don’t you? ‘Please pass de wine!’” she joked to laughter from the crowd. (Jeremy Pelzer, cleveland.com)

COLUMBUS (MCT) —Country music superstar Dolly Parton was at Ohio State University on Tuesday to help celebrate the success of her Imagination Library program, which now sends free books every month to almost half of all children under five in the Buckeye State.

During a private luncheon at the Ohio Union held by First Lady Fran DeWine’s charitable foundation, Parton charmed the crowd with songs, jokes, and an earnest belief in the power of reading to help children throughout their lives.

Parton, who moved beyond her decades-long singing career into building theme parks and starting philanthropic organizations, said she started the Imagination Library in 1995 with her father, Robert “Lee” Parton, whom she said was embarrassed that he hadn’t learned to read or write.

“Even if you can’t afford to go to college or go to school, like my daddy, if you can read, you can self-educate yourself,” Parton said Tuesday. “And so that’s kind of what we’re hoping to just teach kids — to read and to learn to love books.”

The Imagination Library was initially open to children in Sevier County, Tennessee, where Parton grew up. But over the years it expanded, reaching Ohio in 2019.

As of 2019, 64 percent of fourth-graders in Ohio were not proficient in reading, according to a report from the Annie E. Casey Foundation.

Three years later, almost 345,000 children age 5 or younger in Ohio are enrolled in the program, DeWine said, adding she hopes to raise that number to 50 percent by this Christmas. The Imagination Library offers the books for free thanks to money provided by the Ohio legislature and program affiliates around the state.

Ohio parents can enroll their children in the program online at https://ohioimaginationlibrary.org/enroll.

When Fran DeWine asked Parton how she wants to be remembered many years from now, Parton didn’t hesitate to give a witty reply.

“I want them to say, ‘Golly, she looks good for her age,’” she said to laughter from the crowd.