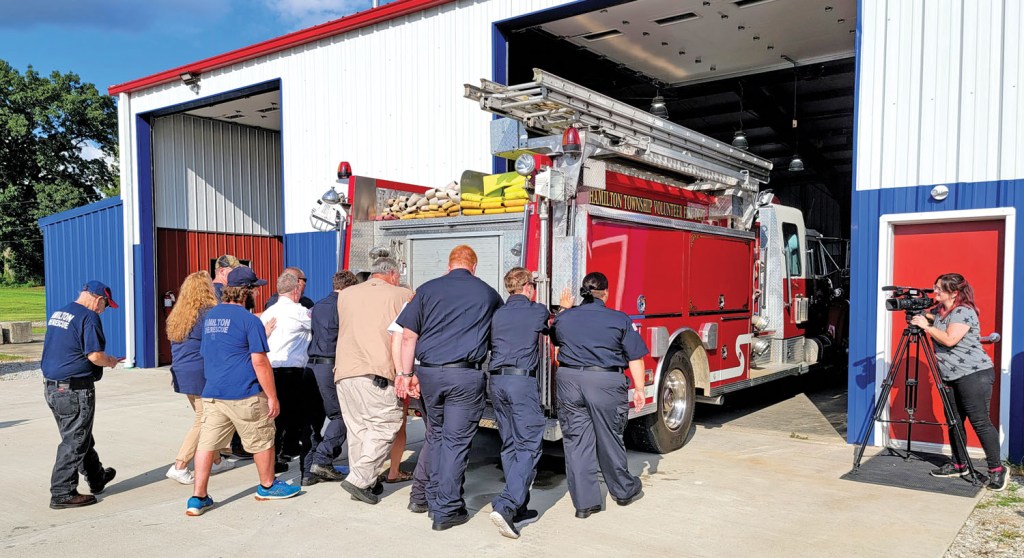 On Monday night, the Hamilton Volunteer Fire Department did the traditional “push in” during the opening of their new fire station on County Road 1A. The long-stnding tradition is that when a new station is opened, the firefighters push in the fire truck. (The Tribune|Mark Shaffer)

This year marks the 50th year since the Hamilton Township Fire Department was formed and the township trustees got them a nice birthday present – a brand new, bigger fire station.

“This is the Taj Mahal compared to the last place we had,” said Hamilton VFD chief Kim Dutey. The former space was old and cramped with barely enough room for two fire vehicles and a utility vehicle. “We are so fortunate that (the trustees) gave us this. It is beautiful, it is perfect for us to grow with and it’s great for the community to see that we are here and we are actively trying to better ourselves.” 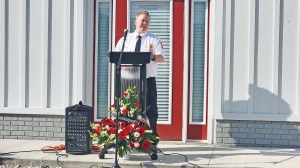 The new building has bays big enough to hold at least four large vehicles, office space, a meeting room and a small gym with equipment.

“We have an awesome gym,” Dutey said, adding it is necessary for the firefighters to work out so they can carry all the equipment that they need during a fire.
“We aren’t here every day, so now the guys and ladies can come in and work out. Core is very important for any type of firefighter. Back injuries are very common.”

The whole building is painted in red, white and blue in honor of those who have served their country.

“Without the military, we wouldn’t be here in the first place,” Dutey said. “So, we added red, white and blue to our facility for that reason.”

As for her favorite part of the new station, it’s the 40-foot-flag pole at the front of the building.

“There is nothing like coming and see the flag flying.”

The momentum to build a new station started around three years ago with the funding coming from fire fees.

The Hamilton Volunteer Fire Department was officially opened on Monday night with a ribbon cutting. The new facility has bigger bays for vehicles and more space for the firefighters. (The Ironton Tribune | Mark Shaffer)

“We looked at other locations and different land to build,” he said. When the property on County Road 1A came on the market, the trustees approached the owner and made a deal. “He came down on the price he was asking and so, we went and bought it.”

He said the trustees were happy with the building.

“It should last us 50 years,” Blankenship said. “We have more space now. We need newer equipment and over time, we will get it.”

Hamilton Township trustee Danny Kerns said he was “overwhelmed. It is absolutely awesome. This is night and day difference from the old place. It is all state of the art, top notch.”

He said their former facility was fine and it worked for what they needed, “but this is long overdue.”

He said the trustees’ plans were to build a new facility and now to work on getting a new fire engine.

“You have to have a building to put that fire truck in before you get it,” Kerns said. “But we are going to look about getting some help to get a new fire truck. That is next on our agenda.”