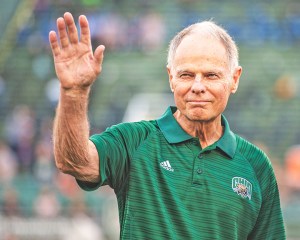 ATHENS, Ohio – The Ohio University Board of Trustees approved the naming of the football field in Peden Stadium for former head coach Frank Solich, the winningest coach in the history of the Mid-American Conference.
Solich coached the Bobcats football team from 2005 to 2021, compiling a record of 115 wins against 82 losses, transforming the program into one of sustained success. The team made 11 bowl appearances, winning five, and was the MAC East champion in 2006, 2009, 2011 and 2016.
Solich transformed the OHIO football program with his high-level leadership skills and strong bonds with his athletes and coaches. Since Solich’s retirement in 2021, numerous donors have come together to honor his legacy by making philanthropic commitments that meet the requirements of The Ohio University Foundation’s naming policy, said Nico Karagosian, vice president for University Advancement and president and CEO of the Foundation.
“Through his leadership and sustained success, Coach Solich has transformed not only the football program, but our relationship with supporters of the program,” Karagosian said. “Several donors contributed funds to honor Coach Solich’s legacy since his retirement, and we believe naming the field is a great way to honor him.”
The formal dedication of the field in honor of Solich will take place during the Oct. 22 home football game.
“Coach Frank Solich has left a lasting legacy at Ohio University, impacting hundreds of student-athletes, coaches, staff members, and Bobcats across the globe,” Ohio University President Hugh Sherman said. “He brought sustained success to our football program and raised the national profile of our University. We are honored to recognize these accomplishments by naming our field, Frank Solich Field.”
The field will carry the name Frank Solich Field beginning with the first home football game on Sept. 3.