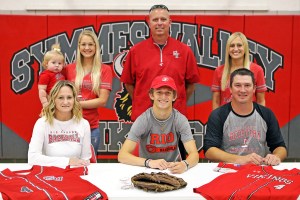 WILLOW WOOD — Throughout his baseball career, this player has lived up to his name.
And it’s a pretty good bet that Levi Best will live up to his name with the Rio Grande RedStorm after signing a letter-of-intent on Thursday.
Best heavily considered football offers from Wilmington College and Capital University, but after wrestling with the decision between football and baseball, he opted for Rio Grande and the diamond instead of the gridiron. 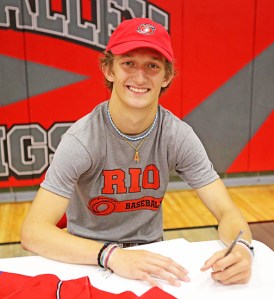 “I just didn’t want to go beat my brains in for the next four years,” Best said with a laugh. “(Rio Grande) was close to home playing baseball and my friends could come and watch me play and I thought that was pretty cool.”
Besides baseball and football, Best also was a standout on the Vikings’ basketball team that won its first-ever Southern Ohio Conference title this past season.
But Best there is no reason to decide which sport he likes more than another.
“Really, just the one I’m playing at the time. I don’t pick a favorite,” said Best. “All my life I thought I was going to go to college to play football, but I guess baseball was the one.”
Best said Rio Grande was the only baseball program he considered in his decision between the two sports of baseball and football.
He said there were several factors that influenced his decision besides proximity.
“Just the way they talked about their workouts, just how hard they worked during the off-season, that sold me,” said Best.
Another reason for his decision centered around his 6.6-second speed in the 60-yard dash which made his an outstanding base stealing threat with the Vikings and was important to his outfield play defensively.
“They said they liked the small game and I’m pretty good at the small game. They said they needed a fast outfielder for right field and I said I’ve played right field my whole high school career. So, that sold me there,” said Best.
“It changes the game if I can get on third (by stealing bases). You’ve got the guys behind me ready to hit the ball. They always hit the ball when I was on.
Although Best can cause a lot of havoc on the base paths, his goals at the next level are very simple and uncomplicated.
“I just want to work hard and get a starting spot. That’s really it,” said Best.
One person that was instrumental in Best’s development as a player was his father Zeb Best who was a three-sport standout at Chesapeake.
“(Dad) was good at baseball, too. He was a huge influence. He helped me the whole way through. Any time I wanted to go to the field and practice, we’d go,” said Levi.
Best was coached by Chad Renfroe who pitched in the Boston Red Sox farm system and knows talent when he sees it.
Renfroe had high praise for Best and said he should be successful at Rio Grande.
“I had him for a couple of years and he is definitely the fasted kid I’ve ever coached,” said Renfroe. “Our offense went on him. If he had a bad game, the offense had a bad game.
“He was the lead-off kid and played a great right field, really any outfield position. He had a good arm so he’ll do well at the next level. He can play rightfield or centerfield. He covers plenty of ground. He has centerfield speed. He’s a good fit there.”
Best is undecided on a major.