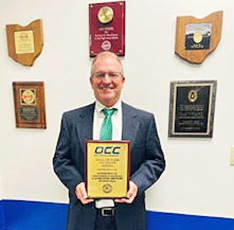 1982 Ironton High School graduate Jay Wolfe was inducted into the Ohio Capital Conference Hall of Fame in March. Wolfe has been an athletic director and integral contributor to the OCC for the past 26 years. (Photo Submitted)

COLUMBUS — The phrase “when you cry wolf” means to keep asking for help when you do not need it.
But when members of the Ohio Capital Conference issue the cry, they are “crying Wolfe” and they get all the help they need.
Jay Wolfe has been a mainstay as an athletic director in the OCC at Watkins Memorial High School for three years and Olentangy High School for 23 years. He worked not only at his schools but within the conference and was recognized in March when he was inducted into the Ohio Capital Conference Hall of Fame.
Wolfe’s career in athletics began at Ironton High School where he enjoyed a checkered sports career.
Wolfe earned five varsity letters his senior year in golf, basketball, cross country, baseball and track.
To add to his athletic numbers, Wolfe was the class president for the 1982 class.
He attended Ohio University from 1982-82 earning a Bachelor’s degree in Math and a masters in athletic administration.
He worked as a graduate assistant and later an assistant basketball coach under Danny Nee and then as assistant coach at Capital and Kent State before taking the job as head coach at Capital.
Wolfe got the opportunity to utilize his administration degree when he landed the job as athletic director at Watkins Memorial High School. He then took the job as athletic director at Olentangy High School in Lewis Center, a position he has held for the past 23 years.
One major influence in Wolfe’s career as an athletic director has been former Ironton Hall of Fame athletic director Mike Burcham. Wolfe remembers getting a job offer to be the A.D. at Watkins Memorial and leaning on Burcham for some advice.
“It was July 4, 1996, I met Mike in his office and he said ‘let’s talk about this.’ I didn’t know that Watkins was going to offer me the job at the time. They called me out of the blue and said they saw I did some stuff at Capital as an A.D.,” said Wolfe.
“So, I went to Mike and he said you’ve only got to do three things in this job: organization, organization, organization. I stopped in to see Mike about a month ago just to say hello, and I said, ‘I’ve got to be honest with you coach, anymore with social media, it’s organization, organization, communication.’ And he said, ‘yep, it probably is.’”
Wolfe has had a huge impact on the athletic program at Olentangy.
The school added eight new sports for boys and girls to compete and the school now has a total of 28 programs.
When the school built a new football stadium, Wolfe played a significant role in its design including weight room upgrades as well as ensuring designated practice spaces for all Braves programs.
But Wolfe’s duties weren’t relegated to just Olentangy High School. The district’s rapid growth led to three additional high schools which meant Wolfe had to rebuild Olentangy’s athletic programs three different times with the district losing athletes to the other schools.
School district nominate a candidate for the conference Hall of Fame. Olentangy has only been in the OCC since 1997 and has just one coach in the Hall of Fame.
“It surprised me a little bit,” said Wolfe. “Someone said you had to see this coming and I said, ‘well, if it means I’ve done the for a very long time in the same league, then I guess yeah,’” said Wolfe.
“My superintendent in his remarks said ‘you can put Jay Wolfe in the Hall of Fame for his number of years, but the things that make him worthy are he has built Olentangy High School three times from scratch because of Liberty opening up, Orange opening up, and Berlin opening up. He’s been wiped out of athletes three times.’”
Wolfe said the opening of Berlin High School was the toughest situation to try and rebuild the programs.
“This year is the first year I feel really good about the numbers we have participating in all the sports and the competitive nature we’re starting to see across most of the sports,” said Wolfe. “This last last one with Berlin hurt. Liberty wasn’t bad. Orange was difficult, but this last one just crushed us.”
During his 26 years in the conference, Wolfe has served the OCC as the boys’ golf and swimming/diving liaison and he has served on the scheduling committee, re-alignment committee and the officials committee.
In addition to his athletic director duties, Wolfe served on the Ohio High School Athletic Association state board in 2007-08 and was named the Athletic Director of the Year for all of central Ohio in 2014.
The OCC Hall of Fame is the second for Wolfe who was inducted into the Ohio Interscholastic Athletic Administrators Association Hall of Fame in 2016.
But being inducted into a pair of Hall of Fames doesn’t rate that high on Wolfe’s list of accomplishments.
“Being able to lead a group of people when we were kicked down pretty hard when losing a bunch of athletes and trying to get people back up and just trying to be resillient because when you lose your whole starting offensive line to the new school, your coach ain’t feeling real good. So, you’ve got to build them back up and be positive. You’ve got to keep fighting for the kids and be as positive as you can be. That would’ve to be one for sure,” said Wolfe.
“The thing that’s the most rewarding is when you have a kid come into your building as a freshman, lost and confused, and then you see him mentally and physically grow in four years and what they can become after four years is what’s most rewarding.”