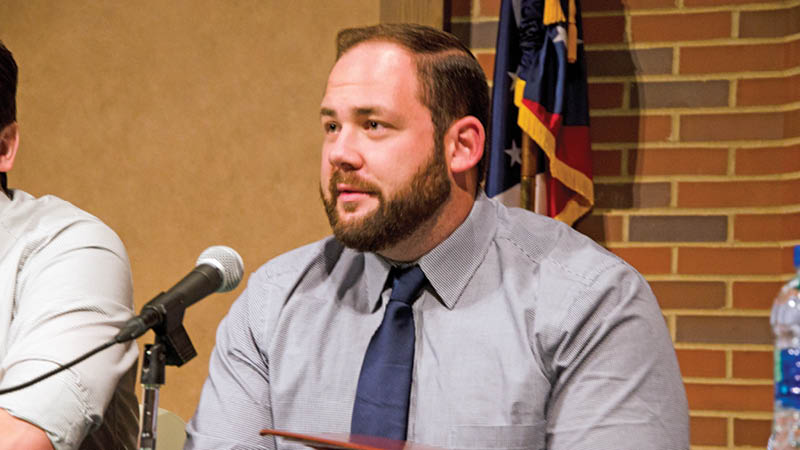 Ironton Mayor Sam Cramblit II was arrested over the weekend for operating a motor vehicle under the influence.

According to a report from the Ohio State Highway Patrol, a trooper pulled Cramblit over at 1:02 a.m. Saturday.

The trooper was going west on South Fourth Street when he saw a vehicle that was going above the posted speed limit, which means that the driver probably hadn’t stopped at the stop sign.

The vehicle stopped and parked and the trooper turned on the overhead lights to indicate it was now a traffic stop.

When the officer came up to the vehicle, he said he saw Cramblit exit the driver’s seat. The front passenger left the traffic stop and the back passenger was asked to stay in the vehicle, although they were later let go.

According to the police report, Cramblit asked the officer, “Are you pulling me over?” and then sat back down in the driver’s seat.

Cramblit was asked for his ID and was able to provide it. While he was looking for proof of insurance and vehicle registration, the officer said he noted that Cramblit’s movements were “slow and lethargic.”

When the officer asked him where he was going, he said Cramblit “pointed to the Auger Inn and stated, ‘We’re going in there, I was bringing them here.’”

The trooper explained the reasons for the traffic stop and “noticed a strong odor of an alcoholic beverage coming from the vehicle. While speaking with Mr. Cramblit II I noticed his speech was thick and slurred and his eyes were bloodshot and glassy.”

When the trooper asked him how much he had to drink, “he stated, ‘I had a couple earlier. I was just driving them.’”

The trooper asked Cramblit to get out of the vehicle and stand in front of the patrol car.

According to the report, Cramblit “stated ‘This is off the record. I’m the mayor here in Ironton, I’m just wondering what you guys are doing in town.’”

Lt. Nick Lunsford, commander of the Ironton OSHP Post, when asked by The Tribune why the OSHP was patrolling in Ironton said, “We enforce traffic laws on all public roadways in Ohio and on any state-owned property.”

Cramblit was given the standard field sobriety tests, including the gaze test and the walk and turn test.

Cramblit asked if the tests could be done at another location because of the large crowd that had gathered outside the bar.

According to the report, the crowd was yelling and screaming, and one woman walked up to the officer and said she wanted to be arrested and taken to jail instead of Cramblit. The trooper helped the woman back across the road and then moved the traffic stop to a nearby empty parking lot and then resumed the field tests.

Cramblit did not do well on the tests, the report said, and the trooper “observed seven standard clues of impairment.”

Another trooper arrived on the scene to administer a portable breath test and Cramblit hesitated before he refused to take it.

Cramblit was arrested for operating a vehicle under the influence, was handcuffed and read his Miranda rights.

He was advised of that he now had an “ALS suspension.” According to the Ohio Bureau of Motor Vehicle website, that is an Administrative License Suspension, which is given out when “a person is stopped for suspicion of driving under the influence of drugs and/or alcohol and refuses sobriety tests, the officer can take the person’s driver’s license on the spot and a suspension begins immediately.”

Cramblit was released from the scene to a sober driver.

He was also advised that he would have to appear in Ironton Municipal Court at a later date for a pre-trial hearing. Cramblit has hired an attorney and referred all comments to him.

Ironton Municipal Court Judge Kevin Waldo has already recused himself and another judge will be brought in to her the case.