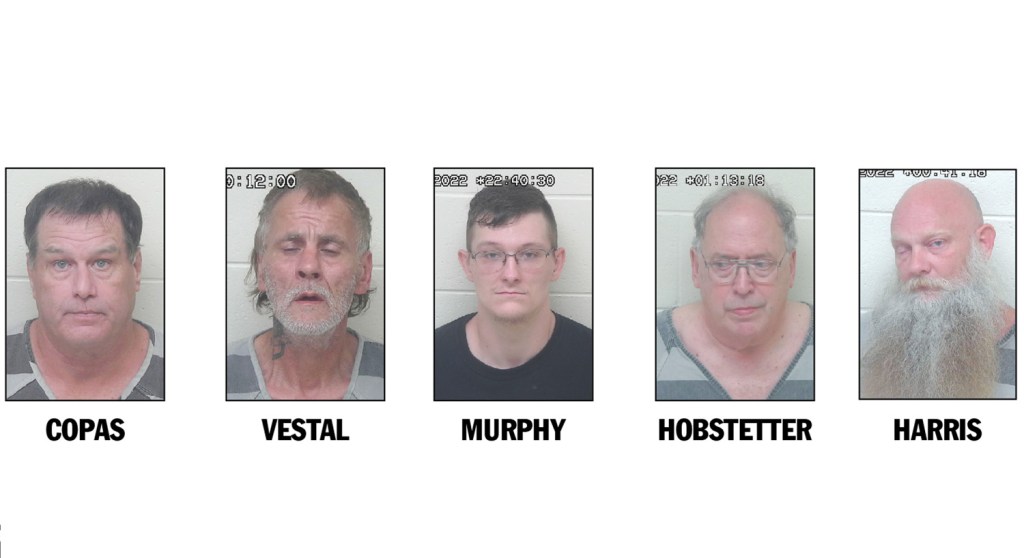 SOUTH POINT — Five men were arrested on Friday after the Southern Ohio Organized and Major Crimes Task Force participated in a statewide sweep in an effort to combat the demand for human trafficking this past weekend.

Lawrence County Sheriff Jeff Lawless said the operation took place after a South Point hotel, outside of village limits, was a target for  suspected drug activity and prostitution. “The Joint Task Force worked to see what prostitution and drug activity was going on, as well as human trafficking,” he said.

According to a press release from the Scioto County Sheriff’s Office, arrested were David Copas, 60, of West Portsmouth; Robert Harris, 49, of Jackson; Ray Vestal, 55, of Franklin Furnace; and Kline Adam Hobstetter, 72, of West Portsmouth.

Copas, Harris, Vestal and Hobstetter were all charged with soliciting, a third-degree misdemeanor.

Also arrested was Jonathon Murphy, 25, of Portsmouth. Murphy was arrested for compelling prostitution, a second-degree felony.

Lawless said he was “glad we could all get together in order to combat this.”

Thoroughman stated that the statewide sweep was named “Operation Time’s Up.” The Southern Ohio Organized and Major Crimes Task Force conducted undercover operations in both Scioto and Lawrence Counties.

On Friday, the task force conducted an operation in the City of Portsmouth focusing on arresting buyers of sex, commonly called johns. Saturday’s operation was conducted in Lawrence County and it focused on locating victims of human trafficking. The task force did locate six victims, which were offered medical and social services from nongovernmental agencies and nonprofits working alongside law enforcement. Sunday’s operation focused on adult offenders in search of minors with the intent to engage in sexual activity.